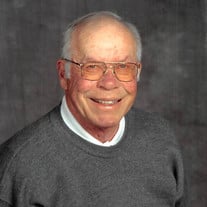 Robert “Bob” Trost, 80, a resident of Fergus Falls, formerly of Appleton, passed away Sunday, October 13, 2019 at Lake Region Hospital in Fergus Falls. Robert Vernon Trost was born on December 14, 1938, to Lloyd and Carol (Pederson) Trost in Graceville, MN. Bob grew up in Chokio and graduated from the Chokio High School in 1956. He was a talented athlete and also a member of the Red Rider Horse Club in Morris, MN. After graduation, he went on to play football at Waldorf College in Forest City, Iowa graduating in 1958. On April 29, 1961, Bob married his high school sweetheart Marilyn Horning at Trinity Lutheran Church in Johnson, MN. Four months later he was drafted into the US Army and spent 2 years serving his country in Colorado Springs. After discharge he proudly continued to serve his country as a member of the Appleton Unit Minnesota National Guard for several years. He always enjoyed telling stories of his years in the service. Bob and Marilyn moved to Appleton, MN in 1964 where they lived for 47 years raising their 3 children Scott, Randy, and Kari. Bob loved being his own boss and was self-employed owning numerous businesses over the years including Trost Ford dealership, The Appleton Motel, Appleton Refuse Service, Kandiyohi Ice Company, and the Sinclair Gas station in Appleton. Bob retired in 1990. They moved to Fergus Falls in 2011 to be closer to family. He was an active member of the Appleton Jaycees, AM Vets, Ridge Runner Snowmobile Club, and Zion Lutheran Church. Currently he was a member of Augustana Lutheran Church in Fergus Falls. Bob was an avid sports fan and had a knack for giving the referees some advice while the gym was quiet. He especially enjoyed watching his children’s activities and continued to be actively involved in his children’s and grandchildren’s lives. He enjoyed his many years on West Battle and Ethel lakes. Hunting and fishing were a special passion of Bob’s. His favorite hunting companions were his sons and Labrador dogs Butch, Jill, Bailey, and Manny. In his younger years he enjoyed “chewing the fat”, playing cribbage, and having a beer with his many cronies in Appleton and at the lake. Bob was a devoted and generous husband, father, and grandfather. He was a man of strong faith, determination, and courage as he battled his health issues the past few years. Left to cherish his memory are his wife of 58 years, Marilyn of Fergus Falls; children, Scott Trost of Plainfield, Ill, Randy (Kim) Trost of Argyle, Tx, and Kari (Darren) Johnson of Fergus Falls; grandchildren, Ashleigh (Evan) Dietz, Jami Scott, Brandi (Matt) Groth, and Kylie Trost all of Texas, Tara, Alyssa, Becca, and Andrew Johnson of Fergus Falls; great-grandchildren, Adeline and Sophie; brother, Jon (Karin) Trost of Champlin, MN; brothers-in-law and sisters-in-law, Wally (Peggy) Horning, Roger Horning, Ted (Adrienne) Horning, Sharon (Don) Sundquist, Judy (Ken) Rethmeier, and Curt (Janna) Horning, and many nieces and nephews. Preceding him in death were his parents, Lloyd and Carol Trost; sisters-in-law, Marilyn Horning, Dorothy Simpson, and Nancy Horning, and brothers-in-law, Don Horning and Gene Simpson. In lieu of flowers, memorials are preferred to Lake Region Healthcare Cancer Center or to Minnesota Military Family Foundation. Visitation: One hour prior to the service at the church. Memorial Service: 11 a.m. Friday, October 18, 2019 at Augustana Lutheran Church, Fergus Falls, MN. Clergy: Reverend Ben Durbin Burial: Oak Grove Cemetery, Fergus Falls Arrangements provided by Olson Funeral Home, Fergus Falls, MN. Online condolences may be sent to www.olsonfuneralhome.com

The family of Robert Vernon Trost created this Life Tributes page to make it easy to share your memories.