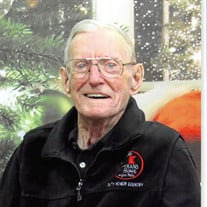 Robert D. Stengrim, 86, a resident of Fergus Falls, died Friday, April 6, 2018, at the Minnesota Veterans Home in Fergus Falls. He was born on October 11, 1931 to Gilbert and Mary (Carlson) Stengrim, in Stephen, MN. He was born and raised in Stephen, MN where he graduated from high school. On January 5, 1951, as a 20-yr old, Bob enlisted in the Air Force. He was a B-29 Tail-Gunner in the Korean War. Bob was awarded the Korean Service Medal in 1951, the UN Service Medal in 1952 and the National Defense Service Medal in 1953. He was honorably discharged on October 9, 1953. When Bob returned home from the service, he worked in law enforcement in his home town of Stephen. He moved to the cities where he worked at the Twin City Arsenal. On August 15, 1959 Bob married Virginia R. Dammann, and the couple had 5-children together. Over the years he worked at the Ford Garage in Pelican Rapids as a bookkeeper and at Farmers Elevator in Rothsay as a manager and bookkeeper. He also served as Mayor in Rothsay. On November 22, 1999 Bob married Myrna Bartness and they made their home in Fergus Falls. Later Bob and Myrna moved to Eden Prairie where they were Resident Managers in an apartment complex. At the age of 70, Bob got his license for water management, so he could manage the outdoor swimming pool and complex. Due to health issues, Bob and Myrna moved back to Fargo, to be close to family and medical services. On November 7, 2011, Bob became a resident at the Minnesota Veteran’s Home in Fergus Falls. During his time at the Veteran’s Home he enjoyed tanning in the courtyard and all the activities the home offered. For the last few years, Bob dealt with kidney issues and received dialysis at the Fergus Falls Dialysis Center 3 times a week. Bob enjoyed hunting, fishing, camping, gardening and elk hunting in Montana. He was a Shriner in Pelican Rapids and also enjoyed working at the annual Scandinavian Festival at the Hjemkomst Center and every Thursday morning, he and Myrna cut pies and served patrons at Sons of Norway. Preceding him in death were his parents; 11 brothers and sisters (Bob was the last surviving child of 12) and Myrna’s son, Keith Bufis and a grandson. Survivors include his wife, Myrna of Fargo, ND; Bob’s children, Debbie Stengrim of Faribault, MN, Scott (Susan) Stengrim of Elizabeth, MN, Kraig Stengrim of Carlsbad, CA, Bryan Stengrim of Barnesville, MN, Tina (Cary) Haugrud of Erhard, MN; grandchildren, Jared (Shonna), Erica (Mike), Brianna, Alison, Emily, Dustin, Reed, Tyson, Luke, Joshua, Carson and Emma; great-grandchildren, Anna, Katilyn, Shira, Sydney, Mason and Gracie. Also surviving are Myrna’s children; Sue (Denny) Walter, Jeff (Sue) Bufis, Diane (Gerald) Anderson, Kim (John) Bedore, Cheri Aldridge, Heidi (Dave) Anderson; as well as Myrna’s 15 grandchildren and “Uncle Buck’s” nieces and nephews. A special thank you to the staff of the Minnesota Veteran’s Home and the Fergus Falls Dialysis Center. Thank you for all the amazing care you gave our father and “Grandpa Bob”. Visitation: 5-6:30 p. m., Monday, April 16, 2018 with a public prayer service at 6:30 at the Olson Funeral Home of Fergus Falls. Clergy: Pastor Allen Westby Burial: Stephen City Cemetery, Stephen, MN

Robert D. Stengrim, 86, a resident of Fergus Falls, died Friday, April 6, 2018, at the Minnesota Veterans Home in Fergus Falls. He was born on October 11, 1931 to Gilbert and Mary (Carlson) Stengrim, in Stephen, MN. He was born and raised... View Obituary & Service Information

The family of Robert D. Stengrim created this Life Tributes page to make it easy to share your memories.