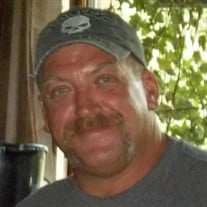 Robert Lee Reich Jr. passed away Saturday, March 19, 2022, at age 52, surrounded by his family at Sanford Hospital in Fargo, ND. He had currently been a resident of Fargo. Rob was born February 10, 1970 in Wichita Falls, TX to Robert Lee Reich Sr. and Pamella Jean Reich. Rob had lived in many different towns and states but mainly considered Fergus Falls, MN and San Antonio, TX home. In 1995, he married Tammy Kalenda-Hagen and became a step-father to Stevie and Toni Hagen. He enjoyed being a “dad” and not only teaching, but coaching the girls in both basketball and softball. They raised Doberman Pincers and had several horses, which he loved caring for and riding. He was a natural. As a young boy, he loved to do all the things boys do. Climbing trees, torturing his sister with bugs and slimy critters, swimming and tubing down the Otter Tail River and North Powder River in Oregon. He also enjoyed sports: boxing, football, baseball and hockey. He would take things apart just to put them back together again. Always “tinkering”. Rob started his working life as a carpenter for Charles Aasberg Construction, building Pole Barns throughout Minnesota and Iowa. He made many friends during that time. He later went on to be a Brick Mason, working in the Minneapolis area. And finally, he was very proud to obtain his Class A CDL and drive long haul to pretty much every part of the USA with one of his trusty sidekicks (Max or Otis), his dogs. He loved being on the road and seeing new places. During the warm months, Rob enjoyed riding his Harley Davidson and the “freedom” of the road. He also loved fishing/ice fishing, muzzle loading for bear and country/line dancing. He taught his sister how to two step, three step, cotton eye joe and the like. He threw darts on league and shot pool as well. The proudest moment for him was when he discovered he had a biological daughter, Danielle about 11 years ago and then to learn that he was also going to be a grandfather. Danielle and Rob were fortunate enough to enjoy a long ride together on their bikes last year. Passing before him were his father, Robert Reich Sr. and his girlfriend, Sandra. He leaves behind his trusty and loyal companion, Otis. As well as his mother, Pamella Koep (David) from Vining; his daughter, Danielle Linn from New Ulm; his sister, Patty Thompson (Creed) from Underwood; step-sister, Tina Vaughan (Jaimie) from Ottertail; granddaughter, Olivia; grandson, Owen; nephews, Justin Saurer, Daniel “DJ” Halvorson, Sean Daniels, and Eli Vaughan, along with numerous cousins, aunts, uncles, and great nieces and nephews. Rob will be greatly missed by many. His quirky grin/smirk and giggles/laugh will forever be imprinted in our hearts and we will cherish all of the good memories we shared. Memorial Gathering: 1:00 p.m. to 4:00 p.m. Saturday, April 2, 2022, at the Underwood Community Center, 200 South Main Street, Underwood, MN 56586. in honor of Rob, ride your bike (weather permitting). Assistance provided by Olson Funeral Home in Fergus Falls. Online condolences may be sent to www.olsonfuneralhome.com

Robert Lee Reich Jr. passed away Saturday, March 19, 2022, at age 52, surrounded by his family at Sanford Hospital in Fargo, ND. He had currently been a resident of Fargo. Rob was born February 10, 1970 in Wichita Falls, TX to Robert Lee Reich... View Obituary & Service Information

The family of Robert Reich Jr. created this Life Tributes page to make it easy to share your memories.