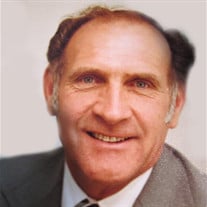 Robert “Bob” McMorrow, 93, of Fargo, died Monday, July 22, 2019 at Sanford Health. Bob was born on Sept. 5, 1925 in Hankinson, ND, one of six children to Robert and Clara (Kath) McMorrow. He grew up in Breckenridge. When his parents divorced, he and Merle stayed with his father. Bob worked and often stayed on the Clark Hanson farm near Foxhome. After graduation he worked in the Seattle-Tacoma Shipyards. He enlisted in the Merchant Marine but before he was called for duty, he was drafted in 1943 by the Army for WW II. He secretly married his sweetheart, Iva Mae Boren on Dec.19, 1943 and left for basic training in Paris, TX a week later. He shipped overseas in May 1944, served in the 758th Field Artillery Battalion in Battle of the Bulge in Belgium and NE France and in Hurtgen Forest in Germany, in charge of a 50-caliber machine gun. He returned after discharge in early 1946. Their daughter, Sandra, was born and they lived in Breckenridge, Sauk Center and Fergus Falls on Maple Avenue. Bob and I.M. “Terry” purchased a home on Wall Lake in 1967. It was Bob’s much-loved home for 50 years. Sales was his calling in life and he achieved his greatest success as car salesman for Worner Auto Sales, winning numerous national sales awards. In June 1986 his wife Terry, died after an 8 ½ year battle with cancer. He married Eveleen Hollister in November of 1986 and wintered in Mesa, Arizona until they separated in 2017. Bob sold his Wall Lake home after a difficult recovery from cancer surgery, moving to Bethany-Grace Pointe apartments in Fargo near to his brother, Merle. He loved hunting, fishing, anything outdoors, playing cards and pool, loved birds and dogs, was an avid sports fan-especially basketball and the Vikings and NDSU Bison football. He loved to bake cookies and make his potato salad. He remained very active until his death. He was preceded in death by both parents (father 1956, mother 1968); his first wife, Terry (1986); siblings, Kenneth (1929), Darrell (1937), Mavis (1975), Merle (2018), and Joann (2019). He is survived by his daughter, Sandy (Paul) Peterson in River Falls, WI; two grandsons, Matthew (Missy) Peterson in Arden Hills, MN, and Jon Peterson in Hudson, WI; two great- granddaughters, Madeline (11) and Molly (9) in Hudson, WI; two sisters, Judy Azure of Fargo and Betty (Don) Petron of Florida; many nieces and nephews, and his estranged second wife, Evie. Visitation: Sunday, July 28, 2019 from 3:00 pm to 5:00 pm, with a public prayer service at 4:30 at the Olson Funeral Home, Fergus Falls and one hour prior to the service at the church Service: 11:00 a.m., Monday, July 29, 2019, at Bethel Lutheran Church in Fergus Falls Clergy: Reverend Elroy J. Vesta Interment: Bethlehem Cemetery in Fergus Falls Preference for memorials is Liberty Lutheran Church in Fargo or the Fargo VA Health Service where, as a WW II Veteran, he received such excellent healthcare. Arrangements with the Olson Funeral Home of Fergus Falls Online condolences may be sent to www.OlsonFuneralHome.com

The family of Robert "Bob" McMorrow created this Life Tributes page to make it easy to share your memories.