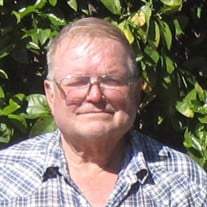 Robert Theodore Bruns, 78, of Fergus Falls, died Sunday, May 16, 2021, at LB Broen Home in Fergus Falls. Bob was born, June 19, 1942, in Windom, MN, to Melvin and Emma (Schultz) Bruns. He attended school in Fergus Falls. He was in the Army National Guard from 1964 – 1970, serving during the Vietnam conflict, and was Honorably Discharged. On November 27, 1983, Bob married Colleen Ketterling at Trinity Lutheran Church in Fergus Falls. For the majority of Bob’s working career, he was a ready-mix plant manager and truck driver. He owned his own bait business and was employed with Hoffman Glass, K & G Ready Mix, Lampy Ready Mix, Aggregate Industries, and Elbow Lake/Wendell fertilizer plants. Pretty much, if there was a hobby invented that appealed to him, Bob did it. He was a gardener, a canner, a hunter, a fisherman, a trapper, a long-range target shooter (steer and calf shoot – best of 150 people) (eight to ten shots in one hole), an ammunition “reloader”, an owner/pilot of a Piper Super Cub, a ham radio operator (WB0NSW) and a devoted snowbird, traveling in his motorhome the last 14+ years of his life. He was also a wonderful husband and father. He was a lifetime member of the MN Trappers Association and a member of the American Legion. Preceding him in death were his parents; brother, Gerald; sister, Beverlee McMullin; and nephew, Michael McMullin. Robert is survived by his wife, Colleen of Grand Forks, ND; son, Jacob of Dalton, MN; sister, Kathleen “Kathy” Bruns; in-laws, Clinton “CR” (Mary) McMullin, Warren (Deborah) Ketterling, Janell (Ken) Swanson and numerous nieces and nephews. Walk Through Visitation: 5:00 p.m. – 7:00 p.m., Friday, May 28, 2021, at the Olson Funeral Home, Fergus Falls. Inurnment following visitation: Trinity-Faith Lutheran Cemetery, Fergus Falls Arrangements provided by the Olson Funeral Home in Fergus Falls. Online condolences may be sent to www.olsonfuneralhome.com

Robert Theodore Bruns, 78, of Fergus Falls, died Sunday, May 16, 2021, at LB Broen Home in Fergus Falls. Bob was born, June 19, 1942, in Windom, MN, to Melvin and Emma (Schultz) Bruns. He attended school in Fergus Falls. He was in the Army... View Obituary & Service Information

The family of Robert "Dutch" Bruns created this Life Tributes page to make it easy to share your memories.