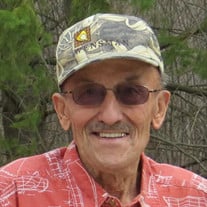 Robert was born November 20, 1923, on the family farm in Shakopee, Minnesota, to Herman August Charles and Anna Marie Catherine (nee Marty) Boldt. He was baptized on December 9, 1923, and confirmed on March 25, 1937, at St. John’s Lutheran Church, Shakopee. His confirmation verse was: “Be thou faithful unto death, and I will give thee a crown of life.” Revelation 2:10 He received his elementary education at Eagle Creek District Number 6, the country school one mile from his home. Following completion of the eighth grade, he worked with his father on the family farm. At age 18, after the death of his father, Robert worked the farm on his own to assist his mother in the care of his two younger sisters. As the supporter of the family, Robert’s military service was deferred until 1949, when he was drafted into the United States Army. During his first enlistment, he was stationed in Arkansas, Georgia, and Colorado. He was released from military service in 1950, but recalled again in 1951. During his second enlistment, he was stationed at Fort Benjamin Harrison, near Indianapolis, Indiana. He attended services and functions at Trinity Lutheran Church in downtown Indianapolis, and met Trinity’s church secretary, Clara Louise Pfaffman. Robert and Clara were married in Indianapolis on June 29, 1952, and made their home on the Boldt family farm in Shakopee where they raised their family. They were blessed with eight children. In addition to working the 66 acres his father and grandfather had worked before him, Robert worked full time jobs away from the farm. He worked at Continental Machines in Savage before beginning his career as a mail carrier for the Shakopee Post Office. He walked a town route for twelve years and drove a rural route for the remainder of his twenty-five-year career. Robert and Clara were faithful supporters of Lutheran education, sending their children to both St. John’s Lutheran School in Chaska, and Lutheran High School in Mayer. Robert took special joy in supporting the annual Lutheran High auction, taking a week’s vacation each year to help with set up for the big event. During the span of Robert’s lifetime, Shakopee grew from a small farming town to a large suburban city. The dirt road which had divided the family farm throughout his childhood became a wide stretch of heavily traveled pavement. Those changes led Robert and Clara to relocate to Fergus Falls in 1999, where they were blessed to spend time with their youngest grandchildren. Throughout his life, Robert enjoyed nature. He spent many hours watching birds, walking in the woods, and planting trees. Together, he and Clara enjoyed family history and antique collecting. They instilled in their children a love of their family heritage as well as their heritage in the church. With most of his children at his side, Robert passed away peacefully in Fergus Falls on July 23, 2021, at the age of 97 years, 8 months, and 3 days. The family expresses thanks and gratitude to the staff of Lake Region Hospital for their gentle care of Dad in his final hours. Robert was preceded in death by his parents, his stillborn son, Jerald Lee, and his siblings: infant sister, Florence, infant brother, Howard, and sister, Betty Glubke. Most recently, Robert was preceded in death by his loving wife of 69 years, Clara. He is survived by seven children: Janet (Wayne) Kolzow of Sycamore, IL, Judith (Lowell) Schultz of Merrill, WI, John Boldt of Monroe, MI, James Boldt of Minneapolis, MN, Jeffrey (Pamela) Boldt of Shakopee, MN, Jeanne (Jack) Ingalls of Park Rapids, MN, and Jarrod (Darcy) Boldt of Hewitt, MN. Also surviving are many grandchildren and great grandchildren, and his sister, Bernice (Conrad) Schneider. Memorials are appreciated. St. John’s Lutheran Church Chaska, Minnesota Mayer Lutheran High School Mayer, Minnesota Trinity Lutheran Church Fergus Falls, Minnesota Concordia Theological Seminary Fort Wayne, Indiana Services were Tuesday, July 27, 2021, with the funeral at St. John Lutheran Church, Chaska, Minnesota. Committal followed at Valley Cemetery in Shakopee. Pastor John Christensen of Trinity Lutheran Church, Fergus Falls officiated. Afterward, friends and family gathered at the family farm. Arrangements provided by the Olson Funeral Home in Fergus Falls. Online condolences may be sent to www.olsonfuneralhome.com

Robert was born November 20, 1923, on the family farm in Shakopee, Minnesota, to Herman August Charles and Anna Marie Catherine (nee Marty) Boldt. He was baptized on December 9, 1923, and confirmed on March 25, 1937, at St. John&#8217;s Lutheran... View Obituary & Service Information

The family of Robert Boldt created this Life Tributes page to make it easy to share your memories.