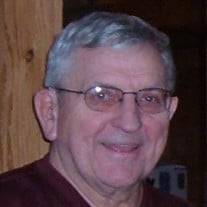 Loving husband, father, and grandfather, Robert (Bob) Emil Block (87) died on Friday, December 18th. Bob was born on November 27, 1933 on a farm in Missouri Valley, Iowa to Emil and Idelia Block. He planned to drop out of school at age 16, but a caring teacher got him interested in sports. Not only did Bob stay, he graduated as valedictorian. He set aside his plans to farm when he received a football scholarship to attend McCook Junior College. His athletic skills continued to open doors for him, and he played for the Thundering Bison at NDSU, where he earned a B.S. in agriculture education. In 1956 he married Vendla Joan (V.J.) Hillstrom, and they had two children, Steven and Susan. While teaching and coaching, Bob continued his education at NDSU, earning an M.S. in education administration. A recipient of the National Science Foundation Scholarship, he completed an additional master’s degree at Oregon State University. He concluded his studies with a specialist degree in education administration at UMD, but never stopped learning and advocating for public education. Bob’s academic achievements are a testament to the difference one teacher can make. Bob’s spirit of service manifested in his professional and personal life. After 36 years in public education, Bob headed the rural addressing initiative in Otter Tail County to improve delivery of emergency services. Upon completion of the initiative, he served as Ottertail County Commissioner for 8 years. Bob continually gave back to the community, participating in several organizations in which he held leadership positions: Rotary, Kiwanis, Chamber of Commerce, the United Way Fund Drive, and Bethlehem Lutheran Church. Additionally, he contributed to a host of education committees and boards at the state level. As a man of deep faith, he gladly contributed his time and talents to strengthen the community and help those in need. Through his membership of Ducks Unlimited and Pheasants Forever, Bob combined his commitment to community with his love of the outdoors. He shared many good times with family and friends in northern Minnesota hunting ducks, geese, pheasant and deer, bringing home meat that V.J. dutifully, albeit reluctantly, prepared. He also made a few trips out west to hunt elk and deer. Later in life he said “I don’t care anymore if I get a deer. I just like being out there.” Bob’s love of nature included spending time on the lakes, catching fish, and stretching the truth about the ones that got away. With fellow Fergus Falls anglers, he made several trips to Canada. He especially enjoyed the annual Minnesota fishing opener with former teachers, friends, and brother-in-law Randall Preston. Even as Bob’s memory declined, he maintained his positive nature, ever ready with an encouraging word and humorous quip. He had a heart of deep gratitude, never neglecting to express appreciation (often multiple times) for a gift, visit, or even just a card. Bob is survived by his wife, V.J.; children, Steven (Heidi), Susan (Mark); grandchildren, Bobbi Jo, Nicholas, Solveigh; brother, Walter; and many friends and relatives. All memorials will be donated to Dollars for Scholars, the local chapter of which Bob set up to support local high school graduates pursue higher education. Memorial Service: 11:00 a.m. Saturday, June 26, 2021, at the DeLagoon Picnic Shelter, 1941 DeLagoon Park Dr, Fergus Falls, MN 56537. Please bring your own lawn chair. Clergy: Reverends Kate Bruns and Stan Satre Interment: Bethlehem Cemetery, Fergus Falls, MN Arrangements are provided by the Olson Funeral Home in Fergus Falls. Online condolences may be sent to www.olsonfuneralhome.com

Loving husband, father, and grandfather, Robert (Bob) Emil Block (87) died on Friday, December 18th. Bob was born on November 27, 1933 on a farm in Missouri Valley, Iowa to Emil and Idelia Block. He planned to drop out of school at age 16,... View Obituary & Service Information

The family of Robert "Bob" Block created this Life Tributes page to make it easy to share your memories.