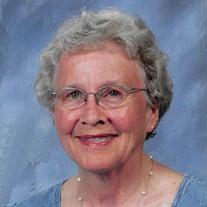 Rita Magdalene (Monson) Woolson, 87, a resident of Fergus Falls, died Thursday, March 1, 2018, at the PioneerCare Center in Fergus Falls, surrounded by loved ones following a brief illness with vascular dementia. She was born on April 17, 1930, at Wright Memorial Hospital in Fergus Falls, MN, to Philip R. and Audrey Beatrice (Caylor) Monson. Rita graduated from Roosevelt Sr. High School in 1948 and went on to attend Hamline University in St. Paul, MN. She graduated in 1952, receiving a teaching degree with a major in physical education. Rita began her teaching career in Breckenridge where she met her future husband, Loren. On August 16, 1953, Rita married Loren Woolson at Grace Methodist Church in Fergus Falls. To this marriage, three children were born. They made their home in Breckenridge where they both taught school until 1955, when Loren was offered a teaching contract in Fergus Falls. Rita did long-term substitute teaching throughout her life. Grace United Methodist Church played a very important role in Rita’s life. She and Loren served as MYF advisors in their early married years. She was active in Christian education, United Methodist Women, and Mission Commission. Rita had a strong belief in service to others. Rita and Loren were part of many Short-Term Volunteers in Mission groups, traveling throughout the US and the Caribbean. They found a “home” at UMCOR’s Sager Brown where they spent 17 years as long-term volunteers; Rita working in the Depot and the sewing room. Rita was a volunteer for Lake Region Hospital’s Auxiliary for many years and was a 50+ year member of Chapter BU PEO. Rita was a devoted wife, mother, and grandmother. She was happiest when surrounded by family, including her grandchildren. Rita enjoyed nature and being outdoors; early days on the farm in Iowa, camp counseling at Widjiwagan, gardening, family camping trips covering the US, and “birding” with Loren. The Monson Lodge on Lake Lida was a favorite destination. Many, many summers were spent there with family and friends. Preceding her in death were her parents, Philip and Audrey Monson; and two brothers-in-law. Survivors include her husband of 64 years, Loren; children, Linda (David) Woolson Johnson, Pamela Woolson, and Craig (Therese) Woolson; grandchildren, Caitlin, Gretchen, and Sarah Johnson, Tobias and Beatrice Woolson, and Samantha Woolson; great-granddaughter, Beatrice Pearl Johnson. Rita is also survived by sisters, Mona (Rev. Edwin L.) Bittenbender, Gretchen (Blaine) Farnberg; and many loving nieces and nephews. Memorials are preferred to Grace United Methodist Church, or a charity of the donor’s choice. Visitation: 5-7 p.m. Monday, March 5, 2018, with a 6:30 public prayer service at the Olson Funeral Home in Fergus Falls, and resumes one hour prior to the service at the church Service: 11 a.m. Tuesday, March 6, 2018, at Grace United Methodist Church in Fergus Falls Clergy: Reverend Wes Gabel Interment: Oak Grove Cemetery, Fergus Falls, MN Arrangements are provided by the Olson Funeral Home in Fergus Falls Online condolences may be sent to www.OlsonFuneralHome.com

Rita Magdalene (Monson) Woolson, 87, a resident of Fergus Falls, died Thursday, March 1, 2018, at the PioneerCare Center in Fergus Falls, surrounded by loved ones following a brief illness with vascular dementia. She was born on April 17,... View Obituary & Service Information

The family of Rita M. Woolson created this Life Tributes page to make it easy to share your memories.