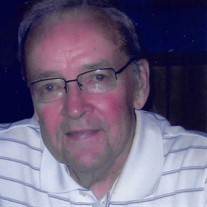 Richard Lowell Thorsen, 81, of Fergus Falls died on Friday, October 25, 2019, at the MN Veterans Home in Fergus Falls, MN. He was born on June 18, 1938, to Gotfred and Gunhild (Haarstad) Thorsen. He was baptized and confirmed at Aastad Lutheran Church, where he was a lifelong member. Richard attended Morris Agricultural School and at age 18, enlisted in the US Air Force and was stationed in Alexandria, LA at the England Air Force Base. He served for four years. He was one of many, the strong and the proud. On September 24, 1960, he married Carol Nelson at Aastad Lutheran Church, they had five children. After the Air Force, Richard farmed with his father in Aastad Township, was a Pioneer Seed Sales Representative, and then drove semi-truck for Berg Trucking of Fargo. In retirement, he worked delivering cars for Nelson Auto Center, and during the spring and fall at Cenex Harvest States Elevator. He was a member of the Eagles, Elks, and the YMCA, where many friendships were made having coffee with everyone. Richard loved MN Twins baseball! A highlight were his trips to the cities to see them play. His grandchildren were very important to him, and he always looked forward to their visits. Grandpa Richard would attempt to introduce them to lefse and lutefisk, his favorite holiday meal. He also enjoyed many trips to Canada hunting moose and visiting with the native guides. Imagine the stories that were told. Preceding him in death were his parents; father-in-law and mother-in-law, Clifford and Lillian Nelson; brother, Truman, and sister-in-law, Maggie Nelson. Survivors include his wife of 59 years, Carol and five children, Randy (Babette) Thorsen of Fergus Falls, Dean (Lori) Thorsen of Dalton, Stephanie (Chris) Ewert of Fergus Falls, Michael Thorsen of New Hope, and Matthew (Greice) Thorsen of Albertville. He also leaves behind 13 grandchildren; nine great-grandchildren; brothers and sisters-in-law, Gordon (Harriet) Nelson, Donna Thorsen, Sybil (Ray) Westerberg, Roger (Jane) Nelson, Don Nelson, Sylvia (Meryl) Ellingson, Loren (Pat) Goese, Karen (Fred) Taylor, and Linda Fedigan, and many nieces and nephews. Carol and family have a deep appreciation for the staff at the MN Veterans Home in Fergus Falls. Over the past 19 months, they have showered Richard with affection, honor, and BINGO games. Thank you! “Off we go into the wild sky yonder, Keep the wings level and true; If you’d live to be a grey-haired wonder, Keep the nose out of the blue! Flying men, guarding the nation’s border, We’ll be there, followed by more! In echelon we carry on, Nothing will stop the U.S. Air Force!” (taken from the Air Force Song) Visitation: one-hour prior to the service at the funeral home Memorial Service: 11 a.m., Friday, November 1, 2019, at the Olson Funeral Home of Fergus Falls Clergy: Reverend Kate Bruns Military Participation by the Fergus Falls VFW Post #612 and Fergus Falls American Legion Post #30 Interment: Aastad Lutheran Cemetery, rural Fergus Falls Olson Funeral Home in Fergus Falls is in charge of the arrangements. Condolences may be sent online at www.olsonfuneralhome.com

Richard Lowell Thorsen, 81, of Fergus Falls died on Friday, October 25, 2019, at the MN Veterans Home in Fergus Falls, MN. He was born on June 18, 1938, to Gotfred and Gunhild (Haarstad) Thorsen. He was baptized and confirmed at Aastad Lutheran... View Obituary & Service Information

The family of Richard Thorsen created this Life Tributes page to make it easy to share your memories.