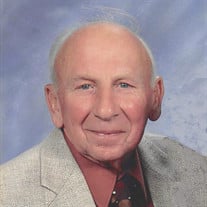 Richard Carlton Norman, 80, a resident of Fergus Falls, MN, passed away on Saturday, March 17, 2018, at his home surrounded by family. He was born on May 22, 1937, in Fergus Falls, to Robert and Bernice (Junken) Norman. Richard graduated from Fergus Falls High School in 1955. In the fall of 1955, Richard enlisted in the United States Navy, serving on the U.S.S. Salisbury and the U.S.S. Oriskney. Richard was united in marriage to the love of his life, Delilah Duenow, on June 4, 1957, at Immanuel Lutheran church north of Fergus Falls. When Richard returned home from the Navy, he joined Local 126 and worked as a steamfitter. He traveled throughout the Midwest during his career. In 1974, Richard moved his family to Wyoming to start a plumbing business with a Navy friend. They remained there until 1976 when he moved the family back to Minnesota to be close to both of their families. Richard retired in 1989. Richard enjoyed filling his days with woodworking in his shop, bird watching, cheering on any football team except the Packers, listening to music, and coffee time with his friends. He was dedicated to the church family in many ways. Richard loved the time he spent at Full Gospel Businessman Fellowship and enjoyed sharing the love of Jesus and witnessing where ever he went. He was a dedicated, hardworking man that was most proud of his family and the love they have for each other. Preceding him in death were his parents, Robert and Bernice Norman; sister, Marion Johnson; twin brothers, Ronald and Donald Norman; son-in-law, Zackary Ringquist; and brother-in-law, William “Bill” Johnson. Survivors include his wife of 60 years, Delilah Norman of Fergus Falls; his four children, Lisa (Jim) Brown of Dalton, Julie Ringquist of Erhard, Michael (Wanda) Norman of Fergus Falls, Christopher Norman of Fergus Falls; 11 grandchildren; 19 great-grandchildren; sisters-in-law, Valera Norman and Kelly Norman both of Fergus Falls; and numerous nieces and nephews. Visitation: 5-7 p.m. Friday March 23, 2018, with a 6:30 p.m. public prayer service at the Olson Funeral Home in Fergus Falls, and will resume one hour prior to the service at the church Service: 1 p.m. Saturday, March 24, 2018, at Life Church in Fergus Falls Clergy: Pastor Patrick Herzog Military Participation: Fergus Falls V. F.W. Post 612 and American Legion Post 30 Interment: Knollwood Memorial Gardens, Fergus Falls, MN Arrangements are provided by the Olson Funeral Home in Fergus Falls. Online condolences may be sent to www.OlsonFuneralHome.com

Richard Carlton Norman, 80, a resident of Fergus Falls, MN, passed away on Saturday, March 17, 2018, at his home surrounded by family. He was born on May 22, 1937, in Fergus Falls, to Robert and Bernice (Junken) Norman. Richard graduated... View Obituary & Service Information

The family of Richard Carlton Norman created this Life Tributes page to make it easy to share your memories.