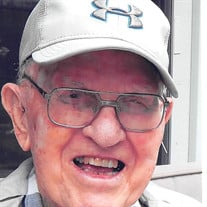 Dr. Richard W. Nicholson, 94, of Fergus Falls, died February, 8, 2019, after a short hospitalization. Richard was born in Superior, NE, on January 12, 1925. After graduating from high school he attended Doane College in Hastings, NE, and then went on to attend Harvard Medical School in Boston, MA, graduating in 1948. During World War II he entered the United States Navy and later, during the Korean War, he served in the United States Army being stationed at Eielson Air Force Base in Fairbanks, AK. After discharge from the Army he practiced medicine in Heron Lake, MN, and went on to specialize in Anesthesia, completing his residency at the University of California and the University of Minnesota. He practiced anesthesia at Lake Region Hospital in Fergus Falls for 10 years. In 1975 he moved to Fort Gibson, OK and while practicing medicine at Muskogee General Hospital in Muskogee, OK, he established the Flying M.D. Ranch, where Quarter Horses were raised for racing. After 50 years of practicing medicine, he and his wife, Connie, moved to Fergus Falls, MN to spend enjoyable years living on Wall Lake. He had many hobbies during his lifetime including hunting ducks, fishing, flying his airplane, raising Quarter Horses and Labrador Retrievers. He is survived by his wife of 47 years, Connie of Fergus Falls. He is also survived by his children, Scott (Ken) of Brantford, Ontario, Chad (Leslie) and their children, Riley and Carter of Tucson, AZ, Chuck (Yon Ku) of Lafayette, IN, Barbara Nelson (Bud) of Dalton and their children, Kurt (Julie) of Forest, VA, Peter of Crosby, ND, and Rachel (Luke) of New Holland, SD, John (Teresa) of Eugene, OR, Richard Harig (Sherry) of Huachuca, AZ, and their children, Melissa Magboo and Jeffrey Harig as well as grandchildren, Denver Nicholson (Kim) of Wichita, KS and Dixie Holder (Mike) of Wichita, KS; brothers-in-law, Doug Fosse (Harriet) of Henning and John DeSantis of Cold Spring; as well as nieces, nephews, great-grandchildren and great-great grandchildren. He was preceded in death by his parents, John and Hettie (Barclay) Nicholson; a son, Richard and a sister-in-law, Kathryn Pearce. Memorial Service: 1 p.m, Saturday, May 4, 2019 at Grace United Methodist Church, Fergus Falls, MN. Clergy: Reverend Wesley Gabel Olson Funeral Home in Fergus Falls is in charge of the arrangements. Condolences may be sent online at www.olsonfuneralhome.com

The family of Dr. Richard W. Nicholson created this Life Tributes page to make it easy to share your memories.