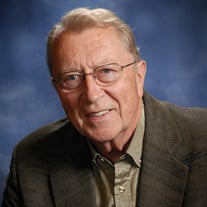 Richard William Muehlhausen was born September 9, 1938 to William August and Violet Victoria Schrader Muehlhausen in Devils Lake, North Dakota. He died under Hospice Care at Woodlawn Lodge in Fergus Falls MN on September 11, 2018. Dick attended school in Devils Lake ND, graduating in 1956. He earned a BS in mathematics in 1960 from the University of North Dakota and a Master’s degree in mathematics and statistics from North Dakota State University in 1961. He married Garnet Mae Larson at the Pioneer Methodist Episcopal Church on June 4, 1960 in Pembina ND. From 1961 to 1964, he worked in the Operation Research Department of the Green Giant Company in LeSueur MN. Then he joined Otter Tail Power as Administrative Analyst, and with the startup of the first computerized billing system in 1968, he become the supervisor of Data Processing. He retired in 1998 as Senior Vice President, Corporate Services. Dick was a member of Jaycees and Kiwanis. He is a past president of the YMCA and the PioneerCare Board of Directors. He has served on many committees of Grace United Methodist Church and was the current president of the Grace United Methodist Foundation. He has made three trips to Baldwin LA to serve with UMCOR. He was interested in environmental issues and conservation practices. He was preceded in death by his parents, and brothers-in-law, O. John Larson and James McDevitt. His wife Garnet survives him and his daughter Laurel (Kirk Graham), son Paul (Betsy) and grandchildren, Emily and Liam; his brother Robert (Nancy) and their children. Also surviving are sisters-in-law Almae Larson and Marcie McDevitt and brother-in-law Mark (Nancy Bjork) Larson and their children. Visitation will be 5-7 pm with informal sharing at 6:30pm, Friday, October 19, 2018, at Grace United Methodist Church and will resume one hour prior to the service at the church. Memorial service will be 11 am Saturday, October 20, 2018, at Grace United Methodist Church, Fergus Falls, with Rev. Dr. Wesley Gabel officiating. In lieu of flowers, memorials may be directed to Grace United Methodist Foundation, PioneerCare Foundation, Lake Region Healthcare Cancer and Research Center. Olson Funeral Home, Fergus Falls, is in charge of arrangements. Online condolences may be sent to www.olsonfuneralhome.com.

The family of Richard William Muehlhausen created this Life Tributes page to make it easy to share your memories.