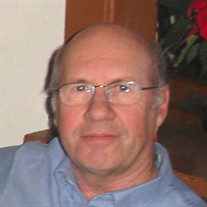 Richard D. Molter, 82, of Fergus Falls, died Monday, September 28, 2020, at PioneerCare in Fergus Falls. Richard was born on March 25, 1938 in Minneapolis, MN, the son of Robert and Bertha (Strande) Molter. He grew up farming on the north side of Fergus Falls. In 1950 the family moved to a farm in Dane Prairie Township, south of town. He graduated from Fergus Falls High School. He served in the Army Reserves. On January 17, 1964 he married Beverly Lerfald at First Lutheran Church in Fergus Falls. The couple lived for a short time in Breckenridge, then returned to the farm in Dane Prairie Township. As an over the road truck driver he drove all over the country for Wahpeton Canvas Company, Glen Rogness Trucking, Mark Schoenning and Metz Baking Company just to name a few. He was a member of Swan Lake Lutheran Church, where he served as a Deacon. He delighted in watching his children and grandchildren in their many Fergus Falls Otter and Underwood Rocket activities. He enjoyed fishing and following the Minnesota Twins and Vikings. He loved to have morning coffee at Big Chief and visit with the neighbors. Preceding him in death were his parents, step-mother, Aida and a brother, Milton. Survivors include his wife, Beverly of Fergus Falls; three daughters, Sheryl (Monte) Baez of Elizabeth, Sharon (Milo) Scott of Fergus Falls, Sheila (Kurtis) Dahl of Underwood; son, Scott Molter of Fargo, ND; sister, Carol; numerous grandchildren and great-grandchildren. Also surviving are his step-mother’s family and numerous nieces and nephews. A private family service will be held at Swan Lake Lutheran Church on October 3, 2020, with the burial following at Swan Lake Cemetery. Arrangements are provided by the Olson Funeral Home in Fergus Falls. Online condolences may be sent to www.olsonfuneralhome.com

Richard D. Molter, 82, of Fergus Falls, died Monday, September 28, 2020, at PioneerCare in Fergus Falls. Richard was born on March 25, 1938 in Minneapolis, MN, the son of Robert and Bertha (Strande) Molter. He grew up farming on the north... View Obituary & Service Information

The family of Richard Molter created this Life Tributes page to make it easy to share your memories.