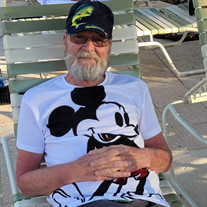 Richard Grenvik, 64, of Fergus Falls, died Sunday, April 17, 2022. Richard John Grenvik was born to John and Norma (Richards) Grenvik on April 18, 1957, in Ames, Iowa. While still a young child the family moved to Wahpeton, North Dakota, where he grew up, attended school, and graduated from Wahpeton High School, class of 1975. “Go Wops!” It was at that time in his life that he met his wife, Jeanne, married and had three children: Lisa, Tim, and Dayna. He also started working at Meide and Son as a bricklayer with his father. Richard spent the next few years working as a bricklayer, bowling in a local couple’s league, and hanging out with family. In 1987, he moved his family to Lexington, Kentucky where he was involved in building the Toyota plant in Georgetown, as well as numerous other commercial buildings around Lexington. While living in Kentucky, Richard decided to pursue the new career of over-the-road truck driving, a long-time dream of his from an early childhood fascination with the “big rigs”. A career that he kept doing, with only a few short breaks, until health concerns forced his retirement in late 2020. Richard enjoyed baking cakes, motorcycle riding, spending time with friends and family, and telling really big stories. He was universally known as a talented “bull-shitter” and could have his audience in tears with laughter as he recounted embellished and exaggerated tales. He had a crazy sense of fashion, that only got more outlandish as he aged, which included purple camo shorts, bright neon colors, and borderline offensive sayings on t-shirts. He was outspoken with his opinions, an unashamed Trump supporter, and enthusiastic chauffer for his granddaughter; bringing her to all of her after school activities and proudly bragging that his grandchildren could get him to do anything for them. Richard was preceded in death by his parents, John and Norma, and survived by his ex-wife Jeanne Grenvik, and their children: Lisa, Tim (Regina), and Dayna (Craig); his grandchildren: Joshua, Angel, Jade, Roman, Jasmine, Benjamin, and Nathan. His siblings Larry and Nancy (Terry) and his nieces and nephews: Joe, Jamey (Cheryl), Mason, Lee, Jill, Megan (Stuart), James (Dani), Allison (Todd), Ryan (Vanessa) and numerous great-nieces and nephews. Celebration of Life: 2:00 p.m. Saturday, April 23, 2022, at Messiah Lutheran Church 28813 County Highway 18 Underwood, MN 56586. Richard’s family asks that you dress colorful and fun to honor him. Assistance provided by Olson Funeral Home in Fergus Falls. Online condolences may be sent to www.olsonfuneralhome.com

The family of Richard Grenvik created this Life Tributes page to make it easy to share your memories.