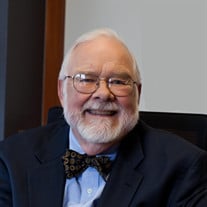 Richard “Dick” Pemberton, 87, of Fergus Falls, died Sunday, December 1, 2019, at PioneerCare. Richard “Dick” Pemberton was born in the northeast bedroom of the family home in Blue Earth, MN on June 14, 1932. He met his wife, Betty Joan, when they were teenagers. They married in 1953, driving through a blizzard from Blue Earth to the Lowell Inn in Stillwater on their wedding night. After earning his law degree, Pemberton joined the Army and taught International Law at the University of Virginia Law School. Dick and Betty Joan welcomed their firstborn son, Richard Jr., in Charlottesville, during the years of military service. Subsequently, they moved to Fergus Falls, MN, drawn to the border zone between the central hardwood forest and the tallgrass prairie. Dick loved to regale his children, held captive in his car, with tales of glacial Lake Agassiz. Pemberton joined the firm that now bears his name in 1960. He traveled extensively, trying cases across the Midwest. In his later years, he found great professional satisfaction in the practice of mediation, and grudgingly retired at the age of 83. Dick enjoyed good conversation, hunting with his sons, driving around Otter Tail county to observe the changing landscape, collecting the artwork of local artist and friend Charles Beck, reading, listening to classical and folk music, dining out at area restaurants with his wife Betty Joan, spending time outdoors at his lake cabin, and gazing at the evening sky while contemplating life. Numerous awards and honors include: selection as a Fellow of the American Board of Trial Advocates and the American College of Trial Lawyers; 1986 President of the Minnesota State Bar Association; over a decade in Best Lawyers in America; Professional Excellence Award from the Minnesota State Bar Association in recognition of career achievements; 2014 Minnesota Lawyer, Attorneys of the Year, “exemplary trial lawyer.” He was a mentor, a skeptic, a mediator, a worthy opponent, and a fierce advocate for the law. Dick is survived by his wife, Betty Joan; children, Richard, Jonathan, Stuart, and Gretchen, and six grandchildren. Visitation: 3:00 to 5:00 p.m., Sunday, December 8, 2019, at the Olson Funeral Home and will resume one hour prior to the service at the church. Funeral Service: 11:00 a.m., Monday, December 9, 2019 at Bethlehem Lutheran Church, Fergus Falls, MN, with a light lunch and fellowship to follow. Clergy: Reverend Tom Peterson Military Participation: Fergus Falls V.F.W. Post 612 and American Legion Post 30 Arrangements are provided by the Olson Funeral Home in Fergus Falls. Online condolences may be sent to www.olsonfuneralhome.com

The family of Richard "Dick" Pemberton Sr created this Life Tributes page to make it easy to share your memories.