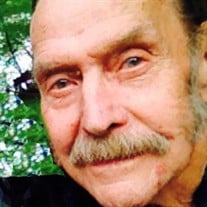 On Thursday October 21st, 2021, Richard Arnold Denzel, 88, formally from Dalton, MN peacefully passed away in Willmar, MN surrounded with loved ones. Dick, as he was best known, was born June 30th, 1933 in Alma Center, Wisconsin to Raymond Arnold Denzel and Mathilda (Haugen) Denzel. He was the second of five kids, Delores, Tootie, Sugar and Bill. He was baptized on the family farm outside of Nashua, MN where he also went to country school. In 1952, he went into the Navy where he was stationed all around the world and served during the Korean War and was discharged in 1956. On October 18th, 1958, he married Sharon Kay (Lysne) in Nashua, and raised their three children, Lorie, Ricky and Randy in Fergus Falls. Sharon sadly passed away of cancer in 1982. Dick remarried on November 21st, 1986 to Lisa (Mongeon) in South Dakota. They raised two more children, Mara and Robby; on the farm he was so proud of north of Dalton. Dick was a welder by trade and traveled extensively throughout the Mid-west with the Boilermakers Union. When he settled in Fergus Falls, he started Denzel’s Welding and Heating. Which later moved out to the farm and became Denzel’s Welding which he worked till well into his seventies. He enjoyed working with his hands, he could fix or weld almost anything and if he couldn’t find a part for something, he’d make one! He enjoyed hunting, fishing and was always willing to have a good time and laugh. He loved spending time with his family and friends, which he was always joking with, with his infectious sense of humor. He was a musician all his life. He played guitar, mandolin and sang Classic Country & Bluegrass Music with his good buddies, bandmates & Family. He was a member of the Boilermakers Union, Minnesota Fish & Game Association, NRA, and Welders Union. Dick is preceded in death by his father and mother, along with his sisters Delores Bullis and Tootie Josephs. He is survived by his siblings, Sugar Woelber of Fergus Falls and Bill (Gail) Denzel of Virginia, MN; his kids, Lorie Kay (John) Hultin of Fergus Falls, Ricky Arnold (Bonita) Denzel of Fergus Falls, Randy Alan (Heidi) Denzel of Fergus Falls, Mara Jeane Barsness of Fergus Falls, and Robby Anthony Denzel of Willmar; his nine grandchildren, Tyler (Samantha) Hultin of Moorhead, Shannon (Kaleigh) Denzel- Bartok of Kaneohe, Hawaii, Tanner Hultin (Taylor Ness) of Fergus Falls, Reece Denzel currently in Boston, Ramie Denzel of Dalton, Ry Denzel (Alex Kirking) of Fergus Falls, Rayne Denzel of Dalton, Makenna Denzel-Olson of Spicer, Tempress Barsness of Fergus Falls; two great-grandchildren, Izzy Hultin and Rhodes Denzel-Bartok, and special friend and ex-wife, Lisa Olson of Underwood. Visitation: one hour prior to the start of the service at the funeral home Service: 11:00 a.m. Friday, November 19, 2021 at the Olson Funeral Home, Fergus Falls Interment: Bethlehem Cemetery, Fergus Falls Arrangements are provided by the Olson Funeral Home in Fergus Falls. Online condolences may be sent to www.olsonfuneralhome.com

The family of Richard Denzel created this Life Tributes page to make it easy to share your memories.