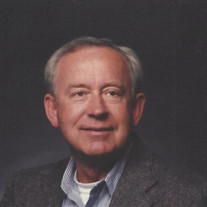 Richard Ernest DeMars, 85, of Fergus Falls, passed away Tuesday, October 1, 2019, at his home. He was cared for by his loving wife of 62 years, with the support of LB Hospice. Richard (Dick) was born September 27, 1934, in Washburn, Wisconsin to Joseph Arthur DeMars and Geneva Cecelia Stock DeMars. His family’s French Canadian, Norwegian, and German customs and beliefs molded Dick’s childhood and were reflected in his life’s values and standards. His early years were spent roaming the woods and waterways of the Chequamegon Bay area of Lake Superior, trapping, hunting, and fishing with his family and friends. At age fifteen he discovered as interest that would become an enduring hobby – with the help of a few of his school buddies, Dick overhauled a flathead V-8 engine from a 1934 Ford five window coupe that he had purchased for fifty dollars. He was hooked, and “worked on” flatheads and the cars they belonged to for the rest of his life. After graduating from Washburn High School, Dick served his country during the Korean Era; in Japan, as part of the Strategic Air Command (SAC) during the Cold War, as a B-36 mechanic ready to “scramble” at a moment’s notice. That Air Force training formed the basis for his livelihood in aviation, and of special interest in high performance engines for the sport of Air Racing. He graduated from Embry-Riddle Aeronautical Institute in Miami, Florida and was employed as a mechanic with United Airlines in Denver. In the early 1970s he started his own aircraft engine overhaul and design business in Ft. Collins, Colorado. Under the names Firewall Forward and Dick DeMars Aero, his quality work and innovative approach attracted high-profile customers world-wide, including those from the air racing and championship aerobatic worlds. In 1957, while stationed at Carlswell Air Force base in Ft. Worth, Texas, Dick met and married Barbara Blubaugh. The couple welcomed two sons and a daughter. Son, Joseph “Joe” followed in his father’s footsteps with a love of old Fords and airplanes. Together they haunted car shows, and restored a WW-II era North American AT-6 Navy training plane into a racer. Joe was a natural at flying and especially like the challenge of aerobatics. It was during the pursuit of this goal in a Pitts Special that he lost his life at age twenty, leaving permanent sorrow in his father’s heart. After Joe’s death, Dick and his friends honored Joe’s life and interest in racing by competing at the National Championship Air Races in Reno, Nevada. Piloted by George Catalano and crewed by Dick DeMars Aero, their T-6, “Nuthin’ Fancy”, won sixth place in the Gold Championship race in 1985 and fifth place in 1986. In 1997, Dick sold his aviation business and he and Barbara moved to the beauty and solitude of Wall Lake near Fergus Falls, where Dick continued with his hobbies and interests. Dick is survived by his wife, Barbara; son, Rick DeMars; daughter, Tamara DeMars; grandchildren, Brett Prutzman, Katelyn Prutzman, and Daniel Golub, and great-grandson, Jackson Behm. Dick will be laid to rest next to his son in the family plot in Loveland Burial Park, Loveland, Colorado. An expression of thanks goes out to everyone who made Dick’s life meaningful and fulfilled. In lieu of flowers, notes and cards are appreciated, or memorials to a favorite charity. Assistance provided by the Olson Funeral Home in Fergus Falls. Online condolences may be sent to www.olsonfuneralhome.com

Richard Ernest DeMars, 85, of Fergus Falls, passed away Tuesday, October 1, 2019, at his home. He was cared for by his loving wife of 62 years, with the support of LB Hospice. Richard (Dick) was born September 27, 1934, in Washburn, Wisconsin... View Obituary & Service Information

The family of Richard DeMars created this Life Tributes page to make it easy to share your memories.