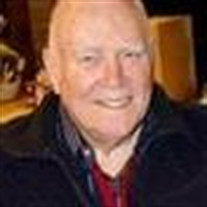 Reverend Willmore Marshall Gundersen, 79, of Fergus Falls, passed away Tuesday, June 1, 2021 at his residence. Willmore Marshall Gundersen was born and raised in a Norwegian-speaking Christian home in West Orange, NJ on April 29, 1942, to Palmer and Aagot (Olsen) Gundersen. The family attended Eagle Rock Norwegian Mission Church where Willmore began playing the guitar at an early age. He loved to sing and write music. At age 13, he made a personal commitment to Jesus Christ and from that day on it was his desire to live and serve the Lord. In 1958, Willmore attended his junior year of high school at Hillcrest Lutheran Academy in Fergus Falls, MN where he met JoAnn (Aarhus) Gundersen. He graduated high school in 1960 from West Orange, New Jersey and began training and working as a carpenter for three years. At age 21, Willmore was invited to go to Norway to sing and preach alongside, Arne Aano, a Norwegian Evangelist. Willmore made his home for the next ten years in Lyngdal, Norway where he built his home along a fjord. His passion was to help people come to know Jesus and to live for Him. On November 28, 1970, Willmore and JoAnn were united in marriage in Lake Mills, IA. After their marriage, Willmore and JoAnn moved to Lyngdal and began raising their family. Willmore continued in full-time ministry as a traveling evangelist with the Norwegian Lutheran Mission Organization. JoAnn worked part-time as a registered nurse in a local hospital. In 1978, after graduating from the Lutheran Brethren Seminary in Fergus Falls, MN the family moved to West Orange, NJ. Willmore served as the Lead Pastor at his home church, Eagle Rock Lutheran Church. Four years later, the family moved west to Cooperstown, ND where Willmore served as the Lead Pastor to Zion Lutheran Church. In 1990, the family moved to Fergus Falls, MN. Willmore resumed his Evangelist ministry overseas with the Norwegian Lutheran Mission Organization. On a part-time basis, Willmore worked alongside his father building many homes in the Fergus Falls area. Willy loved to be on his excavator. Willy and JoAnn established many friendships over the years in Fergus Falls and surrounding areas. On May 19th Willy suffered a massive stroke. After two days in the hospital, he was transferred home and was cared for by family and Hospice. He passed away peacefully in his sleep early on June 1st surrounded by family. Willmore’s life ambition was to live a life worthy of the cross, spreading the gospel of Jesus Christ to whomever would listen. “How beautiful are the feet of them that preach the Gospel of peace and bring glad tidings of good things.” – Romans 10:15 Preceding him in death were his parents, Palmer and Aagot Gundersen; an infant son, Benjamin Gundersen; parents-in-law, Joseph and Alice Aarhus, and a niece, Joni Dalen. Willmore is survived by his wife, JoAnn Gundersen; children, Lisa (Rick) Salvesen, Betty (Ryan) Hargan, Steven (Elizabeth) Gundersen, David Gundersen, Christine (Daniel) Lawson, Julie Gundersen, and Jane (Jordan) Stephens; grandchildren, Brett, Holly, Eric, and Ingrid Salvesen, Jack and Alida Hargan, Faith, Grace, and Cooper Gundersen, and Isaiah, Isabelle, Benjamin, and Catherine Lawson; great-grandchild, Taya (Holly) Salvesen, and sister, Tennia (Lars) Dalen, along with numerous nieces and nephews. Memorials are preferred to Helping Hands Global Ministry 354 170th Street, Detroit Lakes, MN 56501 https://www.elbfhhm.org/home Visitation: 5:00 p.m. to 7:00 p.m. Friday, June 18, 2021, at Bethel Lutheran Church in Fergus Falls, with prayer service at 6:30 p.m. Service: 2:00 p.m. Saturday, June 19, 2021, at Bethel Lutheran Church in Fergus Falls. Please refer back to Willmore’s Tribute Wall for a link to the live-stream of the service. Clergy: Reverend David Foss Interment: Oak Grove Cemetery, Fergus Falls, MN Arrangements are provided by the Olson Funeral Home in Fergus Falls. Online condolences may be sent to www.olsonfuneralhome.com

The family of Reverend Willmore Gundersen created this Life Tributes page to make it easy to share your memories.