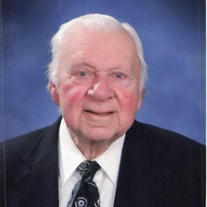 Heaven is rejoicing in song as God welcomed home His faithful servant, Reverend Dick (Richard Benjamin) Grenell, on 12/2/21. Born in Minneapolis, MN on 6/15/23 to Robbin Cecil and Frances Myrtle Grenell, Dick passed into the hands of his Lord at the age of 98 in Evansville, MN surrounded by family, encircled in prayer. Survived by son Dan Grenell of Sacramento, CA; Andy Grenell (Vicci) of Placerville, CA; Beth Wussow (Dennis) of Brandon, MN; Missy Ramsden (Bill) of Gardnerville, NV; and Carole Henderson (Marc) of Saratoga, CA, Dick was preceded in death by Marcy, his loving wife of 44 years. Together, they served several Baptist churches as Pastor and wife after Dick’s ordination as a Baptist Minister in 1952 and until his retirement in 2006. From Duluth, MN to Waterford, Carmichael, and Placerville, CA to Reno, NV and Battle Lake, MN, his congregations were uplifted by his sermons and his songs. An accomplished musician, Dick wrote, arranged and directed music for his churches, choirs, various barbershop quartets and just for the love of putting words to song. Several piano lessons when he was young led to a lifetime of tickling the ivories, and he was blessed with a beautiful voice. And how he loved God’s creation. Growing vegetables was a passion, but just being outside brought him such pleasure. Many yards over the years he planted with trees and flowers, many times his family enjoyed a weekend camping and fishing, and many memories were made as we saw through his eyes the beauty that is this world. Dick will be laid to rest with his wife Marcy at a private ceremony at Groveland Cemetery in Minnetonka, MN. A celebration of life will be held next spring at Grace Evangelical Free Church in Elbow Lake, MN. Assistance provided by the Olson Funeral Home in Fergus Falls. Online condolences may be sent to www.olsonfuneralhome.com

Heaven is rejoicing in song as God welcomed home His faithful servant, Reverend Dick (Richard Benjamin) Grenell, on 12/2/21. Born in Minneapolis, MN on 6/15/23 to Robbin Cecil and Frances Myrtle Grenell, Dick passed into the hands of his Lord... View Obituary & Service Information

The family of Rev. Richard "Dick" Grenell created this Life Tributes page to make it easy to share your memories.

Heaven is rejoicing in song as God welcomed home His faithful...