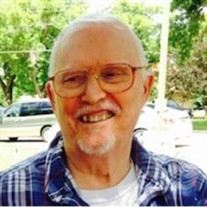 Tom Gehring, 91, resident of Fergus Falls, passed away on Tuesday, March 9, 2021 at Pioneer Care Center. Happy Heavenly Birthday, Dad! We were blessed to have you teach and guide us for almost 92 years. You were devoted to your wife and your family, and you kept family history alive. You survived the COVID-19 Pandemic – we will talk about you forever! Thank you for your love. Tom was born in Ypsilanti, MI on July 13, 1929, the fourth and youngest son of Raymond W. and Dorothy (Clark) Gehring at the start of the Great Depression. When he was 10 years old, his family moved to Houston, TX, then to Bethesda, MD. He was raised in the Washington, D. C. area and graduated from Bethesda Chevy-Chase High School in 1947. He started his college studies in Maryland, moved to Istanbul, Turkey and attended Robert College. He then moved to Bellevue, WA to live with his brother Richard and his family while attending the University of Washington, where he graduated in 1951. Following in his father’s footsteps (WWI), and his brother’s footsteps (WWII) he enlisted in the U.S. Air Force in 1951 and served overseas in the Korean Conflict. While stationed in Presque Isle, ME, he met Ruth James. They met in May and were married on October 29, 1954. They celebrated 54 years together. Tom was baptized and raised in the Presbyterian faith. After marriage, he supported Ruth in her faith and attended Catholic mass. Throughout the years, he appreciated the relationships they had with faith leaders and developed strong friendships with visiting faith partners that continued throughout the years, no matter where they lived. Tom and Ruth settled in Seattle, WA and raised their daughters, Meg and Janet. He worked at Bekins and had the opportunity to move, store and set up exhibits for the 1962 Seattle’s World Fair. He was a member of Toastmasters, enjoyed league bowling and time with family and friends. In 1969, a job change took Tom and his family to Minneapolis, MN for three years, followed by a transfer to Olney, MD, a town close to Bethesda, where his father still lived. Always the good son, he would make weekly visits to his dad to do chores and help out. Tom retired from federal service in 1986. In their free time, they visited family and drove their motorhome to China, ME, Pearl River, NY, Hartford, CT and Cudjoe Key, FL. After Ruth suffered a major stroke in 1988, they continued to travel for several years. Tom was her primary caregiver. In 2007, they made the choice to move to Fergus Falls, MN. Tom moved to Pioneer Pointe and faithfully walked across the street every day, carrying his briefcase, to visit Ruth at Pioneer Home. They spent time with their three grandsons and with their “in-law”, Hope Garrahan. Tom loved playing cribbage and met weekly with his friends to get in a few games; he taught his grandsons the game. He loved the English language – a dictionary and thesaurus were always within reach, next to his copy of “Bartlett’s Familiar Quotations”. He was an avid follower of national and local news and he was a big sports fan. When the television was on, it was tuned to the news or a game or the History Channel, nothing else. Tom embraced the July 4th holiday; he loved hearing music by John Philips Sousa, the history of America, and family reunions. Tom had a dry sense of humor that would make everyone laugh. With family spread out from coast to coast, Tom would be the first to make a phone call and connect with family and friends. He enjoyed video calls with family, grandchildren and great-grandchildren. In 2017, Tom moved to Pioneer Care. Although he spent much time in his room, he made friends and participated in social events. He gave nicknames to the staff and was always thankful for the care he received over the years. He continued to be thankful to his final day. He passed peacefully under the care of Hospice. Preceding him in death were his parents, Raymond and Dorothy (Clark) Gehring, his brothers Robert, Richard and William, his nephew, Mark Gehring and his beautiful wife, Ruth (James) Gehring. Loving survivors are Meg (Ken) Garrahan, Fergus Falls, Janet Gehring, Chesterfield, VA, grandsons Shane (Latoya) Garrahan, Rosemount, MN, Kyle (Brittany) Garrahan, Seattle, WA, Brett Garrahan, Kansas City, MO, great-grandchildren Hayden and Asa, and nephews and nieces in AZ, TX, MD and NC. A private service was held at Pioneer Care in March with Pastor Krehl Stringer. Olson Funeral Home, Fergus Falls, is handling arrangements. Interment will be in Arlington National Cemetery, Washington, D.C. Online condolences may be sent to www.olsonfuneralhome.com

Tom Gehring, 91, resident of Fergus Falls, passed away on Tuesday, March 9, 2021 at Pioneer Care Center. Happy Heavenly Birthday, Dad! We were blessed to have you teach and guide us for almost 92 years. You were devoted to your wife and your... View Obituary & Service Information

The family of Raymond "Tom" Gehring created this Life Tributes page to make it easy to share your memories.

Tom Gehring, 91, resident of Fergus Falls, passed away on Tuesday,...