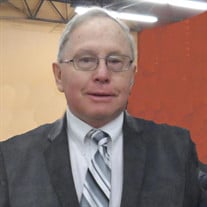 Ralph P. Vollbrecht, Jr. (“Paul”) of rural Fergus Falls died at his home on September 29, 2020. He was 78. Paul was born on August 15, 1942 to Ralph Sr. and Ella (Nibbe) Vollbrecht. He was their second son and fourth child. Paul graduated from Fergus Falls High School and farmed in partnership with his father for many years. He was a member of the Army National Guard. On June 1, 1963, Paul married Barbara Leitte at the First Lutheran Church in Fergus Falls. Out of that marriage came their two children, Bonnie and Randy. When he had had enough of cows’ tails slapping him in the face twice a day and tending hogs, he became a truck driver, first for Metz Bakery and then for Golden Ring Transport. He also worked for a time at Steve’s Cycle in Fergus Falls building and repairing motorcycles and as a custodian at the Fergus Falls Middle School. He enjoyed the solitude of long-haul road trips but likewise appreciated the opportunity to see new places and meet new people. Following his truck driving days, he took employment as a groundskeeper and equipment maintenance worker at the Pebble Lake Golf Club. Paul was fascinated by anything with wheels and an engine, whether it be cars, trucks, tractors, lawn mowers, or motorcycles – especially motorcycles. He was the proud owner of numerous motorcycles through the years. In 2012, at the age of 70, he rode his Harley from Silva, NC, to Grand Rapids, MN, and back, a distance of 1200 miles each way, to attend his grandson’s high school graduation. In addition to his love of wheels and engines, Paul was an excellent craftsman and handyman. He could build or fix almost anything. He was happiest when his hands were busy keeping power tools, appliances, vehicles, and his home and yard in top condition. Paul was preceded in death by his parents, his sister and brother-in-law Mary and Roger Smith, his brothers Richard (Dick) and Anthony (Tony), his brother-in-law Milo Sheldon, and son-in law, Brian McGuire. He is survived by his daughter Bonnie (John) Sorenson of Lakeville, MN; his son Randy of Columbia, SC; eight grandchildren; seven great grandchildren; two sisters: Kathryn Sheldon of Yankton, SD, and Jane Vollbrecht of Cleveland, GA; sister-in-law Esther Vollbrecht of Moorhead, MN; aunt Ida Mae Fabian of Bloomington, MN; many nieces, nephews, and cousins; numerous friends and neighbors; and his dog Panzer. Paul’s wishes were to have his body donated for medical research, but due to restrictions because of the coronavirus, that is not possible. A remembrance ceremony will be held at the Vollbrecht farm on Saturday, October 17, 2020. at 11:00 a.m., for friends and family who would like to attend: 27285 210th Ave, Fergus Falls, MN, 56537. Anyone wishing to honor Paul’s memory is encouraged to make a donation to the American Heart Association or the animal rescue organization of their choice. Online condolences may be sent to www.olsonfuneralhome.com

The family of R. Paul Vollbrecht Jr. created this Life Tributes page to make it easy to share your memories.