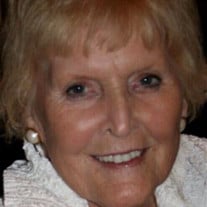 Phyllis Jean Zender, 85, of Venice, FL and Battle Lake, MN, died on Monday, October 22, 2018, at Woodland Lodge in Fergus Falls, MN, surrounded by her children and family in her last days. Having lived a full and meaningful life, she lost a battle to cancer and is now at peace. A woman of faith, Phyllis has a special place in heaven with her childhood sweetheart and long time husband George, who predeceased Phyllis in 2016. Phyllis was born to Clifford and Mabel (Anderson) Strand on October 31, 1932, in Canby, MN. She graduated from Tracy High School. Phyllis first met George Zender in the third grade, and it was a match made in heaven. Phyllis and George spent their childhoods together, eventually getting married in their hometown of Tracy. In 1962 the couple moved to Fergus Falls to raise their family and to continue the Zender family tradition in the soft drink business, first starting with the 7Up brand and eventually adding Coca-Cola and other soft drink brands. Their Bottling Company became the center of the family and was integral to the Fergus Falls Community, with many family members and area youths finding their first job working for George and Phyllis. Phyllis’ time was spent raising their 8 children being a busy and devoted mother for all of their activities, and actively supporting the family business, whether wearing Coke Red in a community parade, or supporting one of the enumerable community programs that George and Phyllis donated generously to. Phyllis and George, with long time family friends Gary and Sharon Spies, opened Mabel Murphy’s. Phyllis was actively involved in management of the popular restaurant that still carries on today. Phyllis was active member of community programs, focusing on childhood development, including getting the hot lunch program started, serving as a Bluebird and Campfire leader, along with teaching catechism. Phyllis’ impact on the community and its youth will continue well beyond her years. After retiring, Phyllis and George spent their summers at their home on West Battle Lake and lived in Venice, FL. The couple enjoyed family get togethers, spending hours on the pontoon and beach, and constantly hosting family and friends. Phyllis was an avid golfer, and an active member of the ladies league at the Balmoral and Venice golf courses. Phyllis was also active in card playing, with a long list of Phyllis’ friends included in regular card clubs. Her other activities included Sons of Norway, genealogy, decorating, ironing everything and being a seamstress. Halloween was her favorite holiday because it was her birthday. She would wear her favorite purple witch costume and hand out Orange Crush or her “witches brew” to the children at school and trick or treaters at their homes. Most of all, family was the center of Phyllis’ heart and passion. Endlessly around and always there for people, Phyllis was the matriarch to what became a strong knit family that jokingly became the size of a small town. Endeared to all her grandchildren and great grandchildren, Phyllis was lovingly called “Bama” by all. Survivors include her seven children, Rebecca (Steve) Ogaard, David Zender, Catherine (Mark) Welle, Mary Zender-Johnson, Martha Zender, Joseph (Emily) Zender, and Nancy (Kent) Mattson; her 33 grandchildren and 43 great-grandchildren. She is preceded in death by her parents; her husband, George; brother and his wife, Donald “Bud” (Shirley) Strand; sister and her husband, Lucille (Russell) Christianson; infant sister, Julia; son, Michael; grandson, David Johnson; great-granddaughters, Ayana and Ayla Alt and her beautiful maltese, Tiffany Ann. Memorials are preferred to Our Lady of Victory School, Fergus Falls or St. Judes Children’s Hospital in lieu of flowers. Visitation: 2:00 - 4:00 PM Sunday, October 28, 2018, at the Olson Funeral Home, Fergus Falls with a Prayer Service at 3:30 followed by the Rosary. Visitation will resume one hour prior to the service at the Church. Mass of Christian Burial: 11:00 AM Monday, October 29, 2018, at Our Lady of Victory Catholic Church, Fergus Falls. Clergy: Father Alan Wielinski, Father Bill Gamber, Deacon Chuck Kampa Interment: St. Otto’s Catholic Cemetery in Fergus Falls Funeral Home: Olson Funeral Home in Fergus Falls Online condolences may be sent to www.olsonfuneralhome.com

Phyllis Jean Zender, 85, of Venice, FL and Battle Lake, MN, died on Monday, October 22, 2018, at Woodland Lodge in Fergus Falls, MN, surrounded by her children and family in her last days. Having lived a full and meaningful life, she lost a... View Obituary & Service Information

The family of Phyllis Jean Zender created this Life Tributes page to make it easy to share your memories.