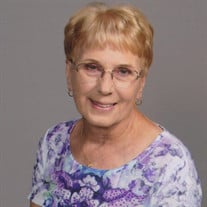 Phyllis Marie Kusnierek, 80, a resident of Underwood, MN, died Sunday, May 12, 2019 at Woodland Lodge in Fergus Falls. Phyllis was born on December 22, 1938 in Ivanhoe, MN, the daughter of Albert and Iola (Singsaas) Lietz. She grew up in Ivanhoe and attended Lincoln County District #12 country school and graduated from Ivanhoe High School in 1956. On November 3, 1959, she married Gerald John Kusnierek in Ivanhoe, MN. Phyllis worked as an insurance secretary and bookkeeper for First National Bank in Ivanhoe from 1956 to 1961. From 1974 to 1977, she was a ward clerk at St. Francis Hospital in Breckenridge, MN. During that time, she also worked as the office manager for State Farm Insurance Company, in Loy Berg’s office, in Breckenridge as well as working as a real estate agent. In 1990 she was employed by AMP Insurance as an insurance agent and worked there until 1994 at which time she became a real estate loan officer and went to work at Farmer’s State Bank in Underwood, MN until her retirement in 2010. Phyllis’s love of God and the church was evident by her involvement at St. James Catholic Church of Underwood where she was a member. Family was very important to Phyllis and she enjoyed spending time with her husband, children and grandchildren. She loved nature and flower gardening along with sewing and quilting; she was involved with the (QOV) Quilts of Valor. Preceding her in death were her parents; son, James Kusnierek; sisters-in-law, Helen Lietz, JoAnn Lietz, Marilyn Lietz and brother-in-law, Leon Lacek. Survivors include her husband, Gerald of Underwood; children, Mark (Janine) Kusnierek of Savage, Michael (Lana) Kusnierek of Fergus Falls, Daniel (Suzette) Kusnierek of Champlin and Tristan (Gerilyn) Kusnierek of Eagan; grandchildren, Andrew, Nicholas, Jack, David, Zoe, Jordan and Kyra; sisters, Joyce (Myron) Knofezynski of Ivanhoe, Mary (Ralph) Jerzak of Elk River, and Carol (Timothy) Matteisen of Benson; brothers, Dennis Lietz of Deerfield, IL, Gerald Lietz of Ivanhoe and John Lietz of Yorkville, NY as well as numerous nieces, nephews and cousins. Visitation: 5:00 – 7:00 p.m., Wednesday, May 15, 2019, at St. James Catholic Church, Underwood, MN, with a 6:30 public prayer service. Visitation will resume one hour prior to the service at the church. Mass of Christian Burial: 11:00 a.m., Thursday, May 16, 2019 at St. James Catholic Church, Underwood, MN Clergy: Father LeRoy Schik Burial: St. Peter and Paul Cemetery, Ivanhoe, MN. Arrangements are provided by the Olson Funeral Home, Fergus Falls

Phyllis Marie Kusnierek, 80, a resident of Underwood, MN, died Sunday, May 12, 2019 at Woodland Lodge in Fergus Falls. Phyllis was born on December 22, 1938 in Ivanhoe, MN, the daughter of Albert and Iola (Singsaas) Lietz. She grew up in Ivanhoe... View Obituary & Service Information

The family of Phyllis Kusnierek created this Life Tributes page to make it easy to share your memories.