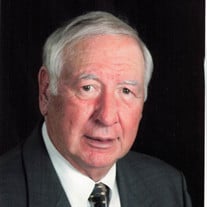 Philip Luverne “Vern” Foster, 85, of Battle Lake, died Sunday, October 31, 2021, at St. Cloud Hospital from complications due to Covid and a fall requiring surgeries. Vern was born July 15, 1936, to Philip and Grace (Lewis) Foster in Minneapolis. He grew up in Minneapolis until 1948, when he and his family moved to Battle Lake. He played many sports in high school and graduated from Battle Lake High School in 1954. He received his BS Degree from the University of Minnesota in 1958 and his MS Degree in 1968 after attending summer schools at the University of Minnesota, University of Hawaii, and University of Northern Colorado. He was just shy of his Specialist Education Degree. He was employed at Sauk Centre High School from 1967 until he retired in 1993. Vern was the Superintendent for 16 years, and the Junior and Senior High Principal for 5 years each. He began his career in 1958 in the Aitkin School District as a Math teacher and football, basketball, and baseball coach. He also worked in the Atwater School District as a Principal, Athletic Director and Counselor. Vern was a member of the Minnesota Association of School Administers, a Life member of the National Education Association, and selected as a Bush Public Schools Fellowship Recipient. He was a member of Phi Epsilon Kappa Fraternity at the University of Minnesota. He was a long-standing Rotary member and awarded the Rotary Distinguished Service Award for International Youth Exchange for his leadership in bringing many foreign exchange students to Sauk Centre. Other honors included the Friend of 4-H Stearns County award and FFA Honorary Chapter Farmer. On July 26, 1958, Vern married his high school sweetheart, Muriel Erickson. Together they owned Twin Lake Landing Resort from 1974 to present. Vern enjoyed reading (especially Louis L’Amour westerns), road trips, mowing the lawn, watching sports of all kinds, and playing with his grand and great-grandchildren. He was a Boy Scout as a youth, and a Boy Scout and 4-H leader. He was proud of his two Eagle Scouts and a 4-H State Ambassador. The family sponsored many foreign exchange students and he loved showing these students Minnesota and the United States. He was devoted to his family and cared deeply about all the staff, teachers and children he taught and led. His faith was important to him and he passed it on to his children. He served on church councils, was a Youth Group leader and taught Sunday School at Lutheran churches in Atwater, Aitkin, and Sauk Centre, MN. He was most recently a member of Zion Lutheran, Amor. Preceding him in death were his parents, Philip and Grace, his brother, Robert and his wife Ruth, his niece, Rose Sparrow, and his aunt and uncle, Henry and Avis Lewis. Vern is survived by his wife, Muriel; his children, Holly (David) Kratzenberg, Dirk (Susan) Foster, and Todd (Alice) Foster; grandchildren, Katelyn (Casey) Johnson, Malia and John Foster; and great-grandchildren, Juniper and Thatcher Johnson. Service: 2:00 p.m. Sunday, November 7, 2021, at Zion Lutheran Church of Amor in Amor, MN, with visitation one-hour prior to the service at the church. Due to Covid, wearing a mask is requested. The service will be streamed on the church’s Facebook site or available for viewing on YouTube after the service. Clergy: Reverend James Gronbeck Interment: Zion Lutheran Cemetery, Amor, MN following the service Arrangements are provided by the Olson Funeral Home in Fergus Falls. In place of flowers, memorials may be sent to Battle Lake 402 Summit St. W Battle Lake, MN 56515 or Sauk Centre Public Schools 903 State Road Sauk Centre, MN 56378 to be designated for educational purposes such as music, reading, arts, sports, or the like at your choosing. Online condolences may be sent to www.olsonfuneralhome.com

The family of Philip "Vern" Foster created this Life Tributes page to make it easy to share your memories.