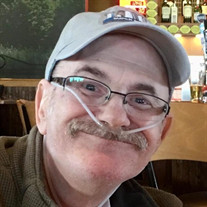 Paul Wilson Suko, age 68, of Fergus Falls, died Friday, July 16, 2021 at the Pioneer Care Center in Fergus Falls, MN. Paul was born on December 29, 1952 in Fargo, ND, to Raymond and Charlotte (Wilson) Suko. He was born prematurely and had the German measles when he was three months old, either of which could have caused his deafness. The Suko family lived in Dilworth, MN, and Paul lived at and attended the Minnesota School for the Deaf in Faribault, MN, during the school year. He graduated from there in 1971. After the death of his mother in 1966, Paul was raised with the help of his stepmother Gail (Connelly) Suko. Gail and Ray had three boys and Paul was happy to become a big brother. On October 29, 1976, he married Judith Dille in Minneapolis. They lived in Minneapolis for many years before buying a home in Erhard, MN. Paul and Judy had a cleaning service for a while and Paul also worked at ShoreMaster in Fergus Falls. Paul and Judy had no children, but loved their dogs Skippy, Muddy, and Cookie. After Judy's death, he moved to Fergus where he lived at the River Bend Apartments for ten years. Paul enjoyed Video Phoning with his deaf friends. He and his special friend Virginia Busby, Saint Paul, MN, phoned each other many times a day. Paul was a big fan of the WWF and watched three nights a week. He was also a MN Vikings fan (when they were winning). His biggest passion though was Mountain Dew. Had one on hand at all times. Family got many, many emergency calls that he was out and needed some immediately. He was able to enjoy a couple of boys-only road trips with his brothers. They went to Mexico and on a short motorcycle trip in ND. Lots of laughs and memories were had by all. Stories that will be repeated for years to come. Paul was of small stature, but had a big heart and always had a big smile for everyone. We will all miss his smile and his mischievous side (like teaching the little ones how to sign a certain swear word). He was preceded in death by his wife Judy, his parents, grandparents and a sister Deborah Rae. Paul is survived by his three brothers, Tom Suko, Fargo, ND, John (Sheri) Suko, Fergus Falls, MN, Shane (Donna) Suko, Breckenridge, MN, and a sister Roxanne (Gary) Rasmussen, Boise, ID. He is also survived by numerous nieces, nephews, aunts, uncles, cousins, and many friends. Memorials are preferred to the Otter Tail County Human Society in Fergus Falls. Memorial Service: 10:30 a.m. Saturday, July 31, 2021 at the Olson Funeral Home Chapel in Fergus Falls, with visitation one-hour prior to the service at the funeral home. Clergy: Reverend Todd Hylden Interment: Bagstevold Cemetery, rural Erhard, MN Arrangements are provided by the Olson Funeral Home in Fergus Falls. Online condolences may be sent to www.olsonfuneralhome.com

Paul Wilson Suko, age 68, of Fergus Falls, died Friday, July 16, 2021 at the Pioneer Care Center in Fergus Falls, MN. Paul was born on December 29, 1952 in Fargo, ND, to Raymond and Charlotte (Wilson) Suko. He was born prematurely and had the... View Obituary & Service Information

The family of Paul Suko created this Life Tributes page to make it easy to share your memories.