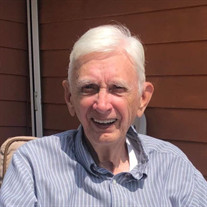 Paul Allan Larson, 86, passed away December 12, 2020, at Woodland Lodge in Fergus Falls. Paul was born on October 28, 1934, in Hannaford, ND, to Louis and Ellen (Johnson) Larson. Paul attended school in Hannaford and after graduation he enrolled at Concordia College in Moorhead, MN. He attended Valparaiso University for a year and later received a master’s degree from the University of North Dakota. He married Betty Michaelson on December 22, 1961. He began his teaching career in Tintah, MN. He then went on to teach at Lake Park, Elbow Lake, and eventually spent 34 years at the Fergus Falls Community College teaching history. He impacted many students over the years and he enjoyed seeing them around the community throughout his lifetime. Paul and Betty had three children: Naomi (1963), Thomas (1965), and Rebecca (1968). They also were foster parents to Minh and Hung Le. They lived in Fergus Falls until they retired and moved to Battle Lake in 1995. They also spent their winters in Mesa, AZ. Paul loved farming, family and faith. He was an active member in several churches and taught many Bible studies throughout his life. He was a member of the Gideons and loved giving out the Word of God to others. His book “Portrait of the Holy Spirit” was self-published in 2011. He was an avid painter and over 50 of his works were put on display at the Community College at the request of Charles Beck. Paul is survived by his wife, Betty; his children, Tom (Angi), Becca Ketterling (Rob), Minh (Jasmine) Le and Hung (Huyen) Le; his grandchildren, Jessica (Chase) McCray, Julia Nelson, Johnathan (Katelyn) Nelson, Joshua Larson, Caleb (Sarah) Larson, Anna (Wynn) Roberts, Joe (Rachel) Larson, Connor (fiancé, Alexia) Ketterling, Logan (Mikayla) Ketterling, Christopher Le, Bianca Le and Dylan Le; ten great grandchildren; and brother, Donald Larson. Preceding him in death were his parents, Louis and Ellen; daughter, Naomi Nelson; sister, Dorothy (Don) Dale; sister-in-law, Lois Larson, and great-grandchild, Alexander. A private family service will be held, with Live-stream. Live-stream Service: 2:00 p.m., Friday, December 18, 2020. Please refer back to the funeral home website and Paul’s Tribute Wall for a link to the Live-stream. Clergy: Reverend Mark Tungseth Interment: Oak Grove Cemetery, Fergus Falls, MN Arrangements are provided by the Olson Funeral Home in Fergus Falls. Online condolences may be sent to www.olsonfuneralhome.com

Paul Allan Larson, 86, passed away December 12, 2020, at Woodland Lodge in Fergus Falls. Paul was born on October 28, 1934, in Hannaford, ND, to Louis and Ellen (Johnson) Larson. Paul attended school in Hannaford and after graduation he enrolled... View Obituary & Service Information

The family of Paul Larson created this Life Tributes page to make it easy to share your memories.