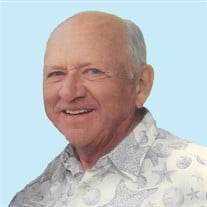 Paul Jule Beithon, 89, a resident of Fergus Falls, MN, (formerly Wahpeton, ND) passed away peacefully on February 7, 2018 at Pioneer Care in Fergus Falls surrounded by his family. Paul was born June14, 1928, in Hankinson, ND, to Elmer & Ruby (Jensen) Beithon, 2nd of 5 children. Paul was raised in Hankinson and graduated valedictorian at age 16 in 1945. He spent summers with his parents at Otter Tail Lake as a child. He was active in Scouting and became an Eagle Scout. He attended the University of North Dakota in Grand Forks, where he graduated with a BS in Pre-Med. At UND, he was a member of Sigma Chi, Alpha Phi Omega (National Service Organization), and Kappa Kappa Pai (Honorary band fraternity). Paul attended Medical School at the University of Nebraska College of Medicine in Omaha graduating in May 1952. He was a member of Phi Rho Sigma Fraternity (medical) while attending medical school. Paul met Marcia Suzanne (Sue) Leininger of McCook, NE, in Omaha. They were married in March 1951 in McCook. Paul spent his preceptorship with Sue’s father, Earl Leininger, a general practice physician, in McCook. He interned at Miller Hospital in St. Paul, MN. In July 1953, Paul joined his father’s medical practice at the Red River Valley Clinic (later MeritCare and then Sanford) in Wahpeton, ND. Paul served as a Captain in the U.S. Army and also served in the National Guard. Paul & Sue remained in Wahpeton until 1997 where they raised 6 children. They built a family cabin on Otter Tail Lake where they spent summers sailing, fishing, skiing, singing around the piano, and just enjoying the lake. Paul spent many hours mowing, cooking, fixing, repairing, cleaning, singing, playing the piano at the cabin, tending to their golden retrievers, and was known as the lake doctor. He would tackle any project and never stopped learning. He read books and newspapers and always had a crossword puzzle in his pocket. Paul believed in giving back to his community…civically, spiritually, and professionally. Paul served on the City Council in Wahpeton; as Mayor of Wahpeton; many diocesan leadership roles in the Episcopal Church of ND and MN and Senior Warden, Vestry, and Lay Minister of Episcopal Churches in Wahpeton and Fergus Falls; Board of Directors for ND SE Mental Health Center; President of the ND Medical Association; Delegate to the AMA; Board of Directors for the State Rehab Facility in ND; State Health Council (appointed by 3 different governors); Board of Directors for Norwest (Wells Fargo) Bank; Fairview Cemetery Board of Directors; Board of Directors for the Center for the Arts in Fergus Falls; Founding Board Member for the Kaddatz Gallery; Rotary (60+ years); Wahpeton Buffalo Club; American Legion; plus many other endeavors. He became a doctor so he could serve others which he did for over 40 years as a Family Practice Physician. He was very proud of the fact that he delivered over 2000 babies. Paul will be remembered for encouraging others from grandchildren to governors, patients to co-workers, committee members to medical students, children to friends, and anyone he met. He will also be remembered for his generosity, hospitality, deep faith, work ethic, kindness, and gentleness. The world is a better place because of the life of Paul Beithon. Paul was preceded in death by wife, Sue; his parents, Ruby & Elmer; his siblings, Patty (Al) Nelson, Bruce (Darlene) Beithon, Roger Beithon, and Mary Karen Beithon, and many close friends. Those left to strive to pass on Paul’s teachings and legacy are his children: John (Yarob Yaghi) Beithon of Eden Prairie, MN, Mark (Sharla) Beithon of Plymouth, MN, Ann (Richie) Smith of Wahpeton, ND, Peter (Jill) Beithon of Fergus Falls, Mary (Bill) Pettit of Fergus Falls, Carrie Beithon of Fergus Falls, and daughter-in-law, Pat Beithon of Minneapolis, MN; Grandchildren: Paul S. Beithon, Andrea Beithon, Ryan Yaghi, Tim (Erika) Beithon, Rachel Beithon, Kelly Smith, Kathleen Smith, Kierann (Jason) Toth, Conor Smith, Katie (Dylan) Dachtler, Brock (Nina) Beithon, Hannah (Dane) Carlson, Joey Pettit, Steven Vergiels, and Erik Vergiels; plus 12 Great-Grandchildren and 2 on the way. He is also survived by many, many friends, nieces and nephews, ‘adopted’ kids as well as his sister-in-law, Dorie Holen of Breckenridge. The family appreciates your love and prayers. If memorials are desired to give, the family & Paul prefer them to be directed to: A Center for the Arts in Fergus Falls, Pioneer Care Foundation in Fergus Falls, or a charity of the donor’s choice. Visitation: 4:30-6:30 p.m. Friday, March 16, 2018, with a 6:30 p.m. public prayer service at the Olson Funeral Home in Fergus Falls, MN, and resumes one hour prior to the service at the church Service: 11 a.m. Saturday, March 17, 2018, at Pioneer Care Celebration Center, in Fergus Falls Clergy: Reverend Jim Zotalis Interment: Oak Grove Cemetery, Fergus Falls Arrangements are provided by the Olson Funeral Home in Fergus Falls Online condolences may be sent to www.OlsonFuneralHome.com

The family of Paul Jule Beithon created this Life Tributes page to make it easy to share your memories.