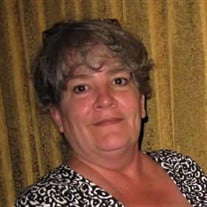 Patricia “Patty” Diane Mavis, 62 years of age of Fergus Falls died Friday, June 19, 2020 at her home surrounded by her family. She was born on Friday, April 4, 1958 to James and Janice (Carlson) Taffe in Graceville, MN. Patty attended Clinton-Graceville High School, graduating in 1976. She also studied at Fergus Falls Community College. On August 21, 1985, she married Steven Mavis in Fergus Falls, MN and was still living in the lovely home he built for his family. She performed duties at Minnesota Motors and the Midweek. Then took pride in being a homemaker until 1990. In recent years, she was employed in customer service roles by Walmart, Kmart, Casey’s, and M&H Gas, which allowed her the opportunity to interact with everyone in the Fergus Falls community. When Patty wasn’t busy being the most fun grandma and spoiling her grandchildren, you might find her on her front porch enjoying a nice sunny day while passing the time mastering crosswords or one of her many other puzzle games. If you happened by her house on a Sunday during football season, she would certainly be wearing her complete Vikings ensemble while enthralled by the football game with her significant other, Craig. If in the company of her family, Patty would be playing cards and board games as she often loved to do; she was a sore loser though because it rarely ever happened. She also loved camping, True Crime TV, reading a suspenseful book, watching movies, writing poetry, and snuggling with her dog, Jack. Preceding her in death were her husband, Steven Mavis; sister, Susie Miller; parents, James Taffe and Janice and Albert Thorson, and parents-in-law, Lawrence and Leanna Mavis. Patty is survived by her significant other, Craig Knodle; children, Amy (James) Owen, Michael (Sara) Taffe, Christopher (Robbie) Mavis, and Cassandra (Christopher) Olson; grandchildren, Joel, Matthew, Mason, Evvy, Emmy, Case, Caden, Izic, Alec, Charlie, and Frederick, and siblings, Kathie Hendricks, Steven Taffe, and Thomas Taffe. The service will be held at 11:00 a.m., Thursday, June 25, 2020, at Bethel Lutheran Church where all are welcomed to pay their respects and honor Patty. Overseeing the events are Reverends David Veum and Ed Monson Interment: Bethlehem Lutheran Cemetery, Fergus Falls, Minnesota Arrangements are provided by the Olson Funeral Home, Fergus Falls, MN Online condolences may be sent to www.olsonfuneralhome.com

The family of Patricia "Patty" Mavis created this Life Tributes page to make it easy to share your memories.