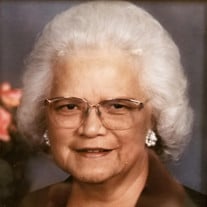 Patricia M. Osmundson, 87, of Fergus Falls, MN, died Sunday, February 24, 2019, at PioneerCare in Fergus Falls. To different people she was Pat, Patricia, Patsy, Maile, mom, auntie, grandma, and great grandma. One person endearingly called her “Peppermint Patti,” and got away with it. Patricia Maile Sylva was born on January 10, 1932 in Paia, Maui, Hawaii. She grew up in Kuau, Maui and attended public school for 8 years, then Maui High School for 4 years. She went to business school for 1 year in Oahu. She worked for an engineer for a year and then at the famous Royal Hawaiian Hotel at Waikiki in Honolulu. On November 2, 1954, Patricia gave birth to a daughter whom she named Roxanne. Patricia was engaged to Roxanne's biological father, who was killed in a fatal car crash one week before they were scheduled to be married. Patricia met Allen Osmundson while he was stationed and serving at the US Army base in Hawaii. In 1958, Patricia left Honolulu, moved to Dwight, ND and married Allen Osmundson. Patricia's sister, Velma Leilani, adopted Roxanne. Roxanne stayed in Maui to be raised lovingly by parents Frank and Velma Domingo. This is one painful family story, like we all have, that Patricia carried all her life. Patricia & Allen lived their first year together in Fargo, ND. She worked at the Cass County Courthouse. On September 7, 1959, their son Curtis was born. Pat and Al moved to Dwight, ND where Al took over his father's beekeeping/ honey business, and Pat got a job at the Dwight Seed and Grain Elevator. She worked at several elevators around the area over the next 30 years. She was very good with numbers. She kept notebooks full of statistics on the Minnesota Twins and Vikings. Pat got a job at Minn-Dak in Wahpeton when the boss saw how fast she could add and subtract numbers. In 2006, Pat moved to Fergus Falls to be closer to Curtis and family. Pat was a lifetime member of Faith Lutheran Church in Dwight. She loved spending time with family and going out with her friends. Laughing, bowling, playing bingo, making ceramics, playing all types of card games, and reading were a few of her favorite things. She loved music so much. She had an extensive record collection, spanning decades and all genres. She is preceded in death by her father -Edward W. Sylva, mother- Louise (Failing) Sylva, brothers-Abraham, Isaac, and Eddie Sylva. Sisters- Gertrude Lein'ala (Sylva) Rodrigues, Velma Leilani (Sylva) Domingo, Louise (Sylva) MacLoves. She is survived by son, Curtis (Milly) of Fergus Falls, daughter Roxanne (Ronald) Crisologo of Kuau, Maui, HI; grandchildren Ellie Maile (Jesse) Tomford, Jessica Mailelani (Charles) Aina, and Jeremy Kalei Crisologo; great-grandsons, great-granddaughter and great-great-grandsons; sisters, Agnes (Sylva) Mason of Honolulu, HI, Eunice (Sylva) Gomes of Honolulu, HI, sister-in-law Carol Osmundson of Wahpeton, ND, and many nieces and nephews. Visitation: 1 hour prior to the service at PioneerCare Celebration Center Memorial Service: 1 pm on Saturday, March 9, 2019, at PioneerCare Celebration Center, Fergus Falls Clergy: Rev. David Strom Assistance provided by Olson Funeral Home, Fergus Falls online condolences may be sent to www.olsonfuneralhome.com

The family of Patricia Maile Osmundson created this Life Tributes page to make it easy to share your memories.