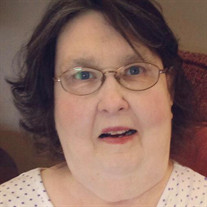 Patricia Ann Goldade, 70, a resident of Fergus Falls, died Wednesday, May 23, 2018, surrounded by her family at the Broen Home. She was born on March 16, 1948, in Bismarck, ND, to Max and Kathryn (Ferderer) Erhardt. Pat graduated from Center High School in 1966. She held a fondness in her heart for her hometown all of her life. In 1967, she graduated from St. Joseph School of Nursing in Dickinson, ND. Pat worked as a LPN at St. Alexius Hospital in Bismarck, ND, for seven years. On May 12, 1973, Pat married Duane Goldade in Bismarck, ND. They recently celebrated 45 years of marriage. Pat spent many years caring for her husband and their 6 children. Ultimately, Duane was able to return that devotion, caring for her in her recent time of need. Pat had a love for raising and caring for her children. She managed a busy household with 6 children and spent her days gardening, baking, and hollering at the children to stop fighting and jumping off the back of the couch. Her children have fond memories of her making them jell-o cakes, hotdish, and potato dumplings. In recent years, nothing lit Pat up more than having an opportunity to hold one of her newest grandbabies. Pat was a member of St. Mary’s Catholic Church in Bismarck until 1990, and then Our Lady of Victory Catholic Church in Fergus Falls. Preceding her in death was her father, Max Erhardt; brother, Francis Erhardt; father and mother-in-law, Michael and Elizabeth Goldade; sister-in-law, Luella Goldade; brothers-in-law, Larry Goldade and Rich Kaiser. Survivors include her husband, Duane Goldade of Fergus Falls; children, Melissa (Matt Showalter) Erickson, Greg Erickson, Marylou (Joel) Salzer, Rebecca (Gary) Mueller, Matthew (Maggie) Goldade, Jonathan (Sarah) Goldade, Angela Goldade; grandchildren, Madeline and Morgan Erickson, Claire, Charles, and William Salzer, Oliver and Evelyn Mueller, Elsie, Cora and Alaina Goldade, Luella Goldade; her mother, Kathryn Erhardt; sisters, Maxine Kaiser and Therese Erhardt; brother, Mark Erhardt; sisters and brothers-in-law, Livina and Jake Selzler, Jerome and Gay Goldade, Michael and Geraldine Goldade, Gerard and Linda Goldade, Laura Goldade, and Margaret Erhardt; as well as many nieces and nephews. Visitation: 5-7 p.m. Tuesday, May 29, 2018, with a 6:15 rosary and a 6:30 prayer service at Olson Funeral Home in Fergus Falls, and resumes one hour prior to the service at the church Mass of Christian Burial: 10:30 a.m. Wednesday May 30, 2018, at Our Lady of Victory Catholic Church in Fergus Falls, MN Clergy: Fr. Alan Wielinski, Fr. Bill Gamber, Deacon Chuck Kampa Interment: St. Otto’s Catholic Cemetery, Fergus Falls, MN

Patricia Ann Goldade, 70, a resident of Fergus Falls, died Wednesday, May 23, 2018, surrounded by her family at the Broen Home. She was born on March 16, 1948, in Bismarck, ND, to Max and Kathryn (Ferderer) Erhardt. Pat graduated from Center... View Obituary & Service Information

The family of Patricia Ann Goldade created this Life Tributes page to make it easy to share your memories.