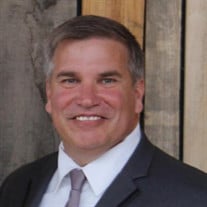 Pastor Kevin Foss, 54, of Battle Lake, died Sunday, January 16, 2022 at his residence after a long battle with cancer. Kevin Scott Foss was born February 16, 1967 to E. Thor and Lillian (Tjornhom) Foss in Fergus Falls, MN. In his early years he lived in Great Falls, MT; Huntington, NY and then Cranston, RI where he attended elementary, junior high, and high school. He graduated from Hillcrest Lutheran Academy, MN in 1985. He attended Houghton College (Houghton, New York) but then graduated from Taylor University (Upland, IN) in 1991 with a Bachelor of Arts in History. He graduated from the Lutheran Brethren Seminary in 1997 with his Master of Divinity. On June 24, 1995 Kevin married Debi Christenson at Bethel Church in Fergus Falls. Kevin had a lot of different jobs throughout his life including several summers at Tuscarora Inn and Conference Center with his favorite task driving the boat. He even worked as a security guard at one point. Prior to attending Seminary, Kevin served as the Youth Director at 59th Street Church in Brooklyn, NY. While in seminary, he served as a Youth Director at Peace Methodist Church as well as Calvary Free Lutheran. At Hillcrest he served as a boarding boss and on the Resident Life Staff. Following Seminary, Kevin served Oak Hill Church in Bloomington, MN from July 1997 to January 2003; Peace Christan Church in Bohemia, NY from January 2003 until December 2014; Bethel Lutheran Church - Battle Lake Campus from December 2014 until present. Kevin was an avid NY Yankee and NY Giants fan but he loved watching his kids play sports even more. Over the years he had the opportunity to coach his kids as well as at Taylor University, Hillcrest Academy, Battle Lake, CYO Youth Basketball, and Sunrise Little League. He loved fishing but was most passionate about being a “Fisher of Men”. His love for people and ability to minister to so many over the years, even with his Facebook posts, was very evident. He chose to let God’s Story shine through his challenging cancer journey. Kevin always used his voice to speak words of truth and kindness, his ears to listen for understanding, his hands to reach out to someone who had fallen, his mind to share the wonders of the gospel, and had an ever-tender heart to love the people that Jesus loved. Preceding him in death were an infant brother, Kevin Thor Foss; father-in-law David Christenson, and uncles Bob Tjornhom, Malvin Tjornhom, and Sig Foss. Kevin is survived by his wife, Debi; his children, Jordan (Annie) Foss of West Fargo, Nick Foss, Mackenzie Foss, Madi Foss all of Battle Lake; his parents, Thor and Lillian Foss (Fergus Falls); brothers David (Michele) Foss of Fergus Falls; Peter (Heidi) Foss of Mount Bethel, PA; Terry (Christa) Foss of Lakeville, MN; and Andrew (Jenna) Foss of DeWitt, IA; Brother-in-law Scott (Val) Christenson and Brad (Paula) Christenson of Fergus Falls; Sisters-in-law Carrie (Charlie) Brue of Fergus Falls; Dawn (Jonas) Nelson of Minot, ND; and Carla (Dave) Rudie of Willmar, MN along with 23 nieces and nephews, and 6 great nieces and nephews. Memorials are preferred to Bethel Lutheran Church, Hillcrest Lutheran Academy, or Tuscarora Inn and Conference Center in Mount Bethel, PA. Visitation: 4:00 p.m. to 7:00 p.m. Friday, January 21, 2022 at Bethel Lutheran Church in Fergus Falls, with prayer service at 6:30 p.m. Visitation will resume one-hour prior to the service at the church. Service: 10:30 a.m. Saturday, January 22, 2022, at Bethel Lutheran Church in Fergus Falls and will be live-streamed through the Bethel Lutheran Church, https://bethellutheran.church/ Clergy: Reverend Rich Iverson and Reverend Dr. Eugene Boe Interment: Stiklestad Cemetery, rural Doran, MN Arrangements are provided by the Olson Funeral Home in Fergus Falls. Online condolences may be sent to www.olsonfuneralhome.com

The family of Pastor Kevin Foss created this Life Tributes page to make it easy to share your memories.