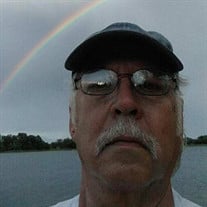 Oscar Trosvig Norgren, 63, of Fergus Falls, died Friday November 1, 2019, unexpectedly at his home. He was born December 7, 1955, in Fergus Falls, the son of Alfred and Inez (Trosvig) Norgren. He attended school in Fergus Falls, graduating in 1974. Oscar served in the U.S. Army from 1974-1978. Serving in the U.S. and Germany. He worked for his father’s painting business in Fergus Falls and later began his own painting business. He moved to Minnetonka, and worked for Norgren Painting for 15 years before being employed with D. H. Gustafson for 20 years. Oscar enjoyed fishing whenever possible, “when he had spare time he fished when he was not fishing”, which led to many evening fish fries. He also had a love for dogs. Preceding him in death were his father, Alfred Jr. and a sister-in-law, Pete Norgren. Survivors include his mother, Inez Norgren of Fergus Falls; brothers, Larry (Darlene Bennett) of Minnetonka and Butch of Fergus Falls; one niece, Georgia Norgren; two nephews, Lanny (Susan) and Steven, along with cousins and other friends. Visitation: 12:00 p.m., Friday, November 8, 2019 at the funeral home Prayer service at 1 p.m., Friday, November 8, 2019 at the Olson Funeral Home Clergy: Chaplain Caleb Larson Military participation by Fergus Falls VFW Post 612 and the American Legion Post 30 Interment will be at the Bethlehem Cemetery, Fergus Falls. Olson Funeral Home, Fergus Falls is in charge of arrangements. Online condolences may be sent to www.olsonfuneralhome.com

The family of Oscar Norgren created this Life Tributes page to make it easy to share your memories.