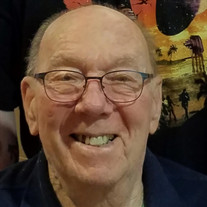 Orval Don Brenaman, 89, a resident of Fergus Falls, died Thursday, January 25, 2018, at Pioneer Care in Fergus Falls, MN. On June 15, 1928, in Omaha, NE, Dr. Azalea Smith went to the home of Harold and Marie (Rouse) Brenaman and delivered their baby boy. They named him Orval Don. An eighth-grade graduate, he attended Benson West grade school, Adams grade school, and Benson High School in Omaha, NE. During WWII, being too young for military service, Orval worked at Omaha Steel and then for the Railroad. He spent 10 years working for Greyhound Bus Lines, transferring to Chicago, IL in 1957. In 1959, he moved to Underwood, MN, and enjoyed working as a painter. Orval became friends of many as he painted either their homes or business. Due to a serious back injury in 1964, he moved back to Omaha for 3 years while he had several surgeries, and then returned to Underwood. A final move was made in 2016 to Park Gardens Assisted Living in Fergus Falls. On February 7, 1948, he married Shirley June Nelson in the living room of her parent’s home. Orval and Shirley were blessed with three daughters, Sharon, Linda, and Gail. Orval had the privilege of delivering his daughter Gail in his car on the way to the hospital. Orval expressed his commitment to God on Father’s Day, June 20, 1965, by being baptized at Benson Baptist Church in Omaha, NE. In 1966, he became a member of First Baptist Church (now Crossroads) in Fergus Falls. He was an Associate member of Crossroads Baptist Church, Apache Jct., AZ, and also attended Basswood Baptist Church, Richville, MN. Orval’s quiet sharing spirit showed in service to others. He was an Ottertail County foster parent for 25 years. His home was a haven for several nieces and nephews over the years. He served on several church boards. Orval was a charter member of the Underwood Lions and did uncountable hours of volunteering at Camp Joy Bible Camp. He enjoyed fishing, traveling, and watching baseball. He spent time doing model cars and paint-by-numbers while recovering from his many surgeries. Wintering in Arizona with friends, Bill and Kay Hayes, was a highlight of his year. Preceding him in death were his parents, Harold and Marie Brenaman; brothers, Gerald and LeRoy; and grandson, John Lerfald. Orval is survived by his wife of 69 years, 11 months, and 18 days, Shirley; children, Sharon Chapman of Dilworth, MN, Linda (Dave) Lerfald of Underwood, MN, Gail (Mike) Maahs of Underwood, MN; 10 grandchildren; 16 great-grandchildren; 3 great-great-grandchildren; brothers-in-law, sisters-in-law, as well as many nieces, nephews, and wonderful lifelong friends. Memorials are preferred to Star Lake Bible Association (Camp Joy). A memorial service will be held at 1 p.m. Monday, January 29, 2018, at Crossroads Church (formerly First Baptist Church), 629 E. Channing Avenue, Fergus Falls, MN 56537. Burial will be at Silent Vale Cemetery, rural Underwood, MN. Assistance is provided by the Olson Funeral Home in Fergus Falls. Online condolences may be sent to www.OlsonFuneralHome.com

The family of Orval Don Brenaman created this Life Tributes page to make it easy to share your memories.