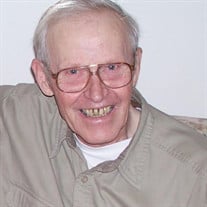 On Tuesday, March 31st, 2020, Orlando James Follingstad, loving husband and father of five children, passed away at the age of 84. Orlando was born on July 4, 1935, in Pelican Rapids, MN to Joseph and Irene Follingstad. Orlando grew up and worked on his family farm in Norwegian Grove Township, MN. On May 23, 1962, he married Janet Lois Haugen. They raised four sons, Orin, Jeff, Mike, and Steve, and one daughter, Judy, and had a wonderful life dancing the night away at Perry’s Supper Club in Pelican Rapids when they were a young couple. Orlando served in the U.S. Navy as a diesel engineer stationed at San Diego, California. In the Navy, he enjoyed the opportunity to travel to San Francisco, Hawaii, and Alaska. In his later years, he would routinely remind us that he visited the North Pole (Point Barrow, Alaska) to deliver supplies to the Navel Arctic Research Laboratory located there. Orlando loved being active, whether it was at work or play. He was just as happy raking the lawn as he was fishing for walleyes. He also loved bird watching, reading, playing cards, and collecting antiques. However, it was his work ethic that defined his character, so it was not a surprise that after retiring, he went back to work. After 30+ years working in the telecommunications industry as an Outside Plant Manager for Hohman Telephone Co. in Pelican Rapids, he followed one of his passions and opened an antique store in Battle Lake, MN, which was mildly successful for a few years (until E-bay came along). During his lifetime, Orlando enjoyed many activities and volunteer interests, such as teaching Sunday school at Faith Lutheran Church in Pelican Rapids, working as a firefighter in Starbuck, MN, and working as a Ski Lift Operator at Hallaway Hill in Maple Wood State Park, for his uncle Walt Spidahl. Orlando was preceded in death by his father, Joseph, his mother, Irene, his son, Jeff, his brother, Ivan, and sister Margaret (John) Danes. He is survived by his wife Janet, his sons, Orin (Jill), Mike (Jill), Steve (Terri), his daughter, Judy (Brad) Ray, and his sisters, Ione Price, Ann Webb, Betty Plush, Joanne Weets, and Elaine Ezsiaosa, and cousins, Paul and Eugene Follingstad. Orlando loved spending time with his grandchildren: Jay, Drew, Mya, Mari, and Lucia. He is also survived by many nieces, and nephews. Unfortunately, due to the corona virus pandemic, the funeral services will be limited to immediate family members. Orlando will be laid to rest at Knollwood Cemetery in Fergus Falls, MN on Saturday, April 4, 2020. Flowers may be sent to Olson Funeral Home, 711 Pebble Lake Road, Fergus Falls, MN, 56537. Memorials may be given to The Battle Lake Good-Samaritan Nursing Home at 105 Glenhaven Drive, Battle Lake MN, 56515. Arrangements are provided by the Olson Funeral Home in Fergus Falls. Online condolences may be sent to www.olsonfuneralhome.com

On Tuesday, March 31st, 2020, Orlando James Follingstad, loving husband and father of five children, passed away at the age of 84. Orlando was born on July 4, 1935, in Pelican Rapids, MN to Joseph and Irene Follingstad. Orlando grew up and... View Obituary & Service Information

The family of Orlando Follingstad created this Life Tributes page to make it easy to share your memories.