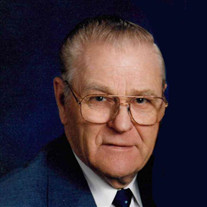 Ole Arlo Ostlund, 93, of Barnesville (formerly of Rothsay), died Saturday, November 16, 2019, at Valley Care and Rehab in Barnesville. Ole was born April 26, 1926 on the family farm north east of Rothsay, the son of Ole and Anna (Rudh) Ostlund. He was baptized and confirmed at Hamar Lutheran Church, Rothsay. He attended country school, District No. 82 and graduated from Rothsay High School in 1944. After graduating from high school, Ole was employed for a short time at the Farmers State Bank in Rothsay. He later began grain farming and also raised turkeys. Ole was a very hard-working farmer and enjoyed farming with his brothers. On April 19, 1952, Ole was united in marriage to Doris Johnson in Rothsay. The couple made their home in rural Rothsay, where they farmed and raised turkeys. They retired from farming in 1989 and moved to Barnesville. They enjoyed their many years of retirement in Barnesville as well as their cabin on Lake Lizzie. Ole cherished his time with his children, grandchildren, great-grandchildren, and his neighbors and many friends. He had a kind heart and was very generous to his family, always taking everyone out for special occasions, birthdays, and holidays. Preceding him in death are his parents, Ole and Anna; sisters, Laura, Minnie, Olga, and Eunice; brothers, Leon, William, Roald, Norman, Vernon, and Reuben, and his wife of 67 years, Doris on September 7, 2019. He is survived by his daughters, Rebecca Ostlund (Mike Corbin) of Eagan and Connie (Kevin) Carlsrud of West Fargo, ND; grandchildren, Ryan Carlsrud (Meagan) of Fargo, ND and Meghan Verhey (Michael) of Portland, OR; two great-grandchildren, Brooklyn and Gavin Carlsrud; sister-in-law, Marilyn Ostlund of Fergus Falls; special nephews, Jeff Ostlund of Fergus Falls and Mark (Becky) Ostlund of Moorhead; sister-in-law, Dorothy Knutson of Moorhead, and several cousins, nephews, and nieces. Visitation: one-hour prior to the service at the church Service: Friday, November 22, 2019 at 2:00 p.m. at New Life Lutheran Church in Rothsay Clergy: Reverend Randy Whitehead Interment: Our Savior’s Cemetery of Rothsay Arrangements are provided by the Olson Funeral Home in Fergus Falls. Online condolences may be sent to www.olsonfuneralhome.com

The family of Ole Ostlund created this Life Tributes page to make it easy to share your memories.