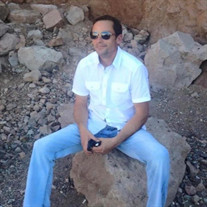 Odin Matthew Beard, 49, of Fergus Falls, died unexpectedly at his home on Friday, July 30, 2021. Odin was born in Guadalajara, Mexico on January 22, 1972, to Carol Alstad and Douglas Beard. He graduated from Fergus Falls High School and later went on to earn a degree in Industrial Engineering from NDSU. He worked for Shoremaster in Fergus Falls. He later started his own successful landscaping business, Shoreline Restorations. He also was employed by Interstate Engineering in Wahpeton, ND and Northern Contours. In 2014, wanting to be his own boss again, he purchased Rainbow Cleaners. Odin enjoyed the outdoors, camping, fishing, four-wheeling, and motorcycle riding. He had a passion for rock collecting, which is evident if ever going into Rainbow Cleaners. He was also an amazing handyman, there was nothing he couldn’t fix. Odin also enjoyed a good cologne. Twenty years ago, he found his soulmate in Jill Backen and they married in Las Vegas, NV. In 2003 they welcomed their beautiful daughter, Brooke. He was a loving father and wonderful husband. Odin is survived by his wife, Jill; daughters, Brooke Beard and Emma (Joe) Hall; grandchildren, Aiden, Addison, and Ella Hall; mother, Carol Alstad; numerous siblings including, sisters, Brenda (Clay) Nelson and Deborah (Tom) Hallisey; special nieces and nephew, Karrah, Johnathan and Karrigan Hallisey; father-in-law, Winston Backen. Preceding him in death were his grandparents; father, Douglas, and mother-in-law, Claudia Backen. There will be a memorial gathering at a later date. Arrangements are with the Olson Funeral Home in Fergus Falls. Online condolences may be sent to www.olsonfuneralhome.com

The family of Odin Beard created this Life Tributes page to make it easy to share your memories.