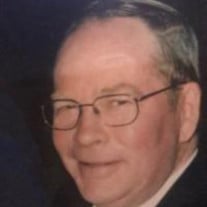 Norman Andrew Tostenson, age 83 of Dalton passed away surrounded by family on November 14, 2020 in Fargo. Born October 15, 1937 in Fergus Falls, Norman was the eldest son of Andrew and Lillian Tostenson. Norman grew up on their family farm in rural Underwood and graduated from Underwood High School in 1956. In 1957 he went to work on Art Ryen’s farm in rural Dalton. He was only supposed to be there for a few months but always humorously referred to it as the ‘long winter’ because he never left. It was there that he fell in love with Helene, Art and Myrtle Ryen’s eldest daughter. They were married at Our Savior’s Lutheran Church in Dalton MN on December 27, 1958. For 30 years Norman and Helene ran the family farm and raised five children. Norman also served in the Army Reserves for a number of years. In 1988 Norman graduated from Austin Technical College in Austin MN along with his son Tim. Together the two of them installed flooring throughout the Fergus Falls and surrounding areas for over 25 years. Norman was excellent at his craft and earned a respected reputation in the community for his workmanship. Norman was an outdoorsman in the truest sense. He took great joy in everything from mowing the lawn, to being out in the fields on the tractor, or playing ball in the front yard with the children and grandchildren. He loved to fish and was an avid hunter who found solace in the woods. He enjoyed golfing at Stalker Lake and joined a Horse shoe League for a number of years. He was athletic and loved sports. As a kid he was a great baseball pitcher and the older kids always let him play with them. They nick named him Pee Wee (a name he proudly accepted) If the Twins were on TV you could always find him watching the game, often with a grandchild or two sharing in the fun. Norman had a beautiful tenor voice, and his great love of music was apparent to all as he sang in the men’s choir, church choir and Barbershop choir and quartet. Love of family started and ended with his dear wife Helene. They could often be seen holding hands and sharing moments of laughter. Norman always had a twinkle in his eye and a warm smile for her. In his last years they spent quiet days together at the farm in each other’s company. Even in his last days it was evident their love was just as bright and alive as it was 62 years ago. His devotion to his children, grandchildren and great grandchildren were unmatched. He was present in the big and small things from nightly bedtime stories to faithfully attending church every week. He wrangled 5 young children in the front pew each Sunday while Helene played the organ. If his children or grandchildren had a football or basketball game, he and Helene were there come rain or shine. He attended piano recitals near and as far as Chicago and Indiana for his son Richard. You could find him making gingerbread pancakes for hungry grandkids on a Saturday morning, and his favorite snack of saltine crackers with butter and jelly was practically legendary. He loved to tell his favorite stories and would laugh each and every time as if they happened yesterday. If you were ever lucky enough to have him take you to school in the mornings there would always be treats. He had a sweet tooth and loved a good donut. You could always find his bowl of jelly beans, chocolate covered peanuts and a cold root beer by his chair. More than even his love for family was his love for his savior Jesus Christ. His faith was not just in words, but lived out day by day in his actions and deeds. He worshiped the Lord in song, and in prayer, and he did it with great joy. He taught his family by example what it means to live humbly, serve others graciously and love unconditionally. We will miss his morning radio playing in the kitchen, his bird whistles and his spot-on impersonation of an auctioneer. We will forever treasure hearing him read the Christmas story on Christmas Eve and leading us all in a rousing round of Jingle Bells and a peaceful Silent Night around the piano. We will miss all of these things and more, but rejoice knowing he is home now with the Savior he loved so much. Blessed be the wonderful, beautiful life and memory of Norman Tostenson. Norman is survived by his loving wife Helene and his brother Gene (Joyce) Tostenson of Fergus Falls MN. His five children Vicki (Ray) Erickson of Fergus Falls MN, Daniel (Jeanette) Tostenson of Minneapolis MN, Debra (Steve) Martens of Dalton MN, Tim (Jennifer) Tostenson of Dalton, MN and Richard Tostenson of Bloomington MN. His grandchildren Nicki, Nathan, Kelsey, Alexi, Dalton, Lydia, Sam, Andrew, Sydney, Hannah and 10 great grandchildren. His sisters- in - law Sandy Tostenson and Dori Ryen. Numerous nieces and nephews. He is preceded in death by his parents Andrew and Lillian Tostenson and brother David Tostenson. Graveside service is open to the public on Friday November 20 at 2:00pm at Swan Lake Church in rural Fergus Falls MN. A Celebration of Life will be held at a future time to be determined. Arrangements are provided by the Olson Funeral Home in Fergus Falls. Online condolences may be sent to www.olsonfuneralhome.com

Norman Andrew Tostenson, age 83 of Dalton passed away surrounded by family on November 14, 2020 in Fargo. Born October 15, 1937 in Fergus Falls, Norman was the eldest son of Andrew and Lillian Tostenson. Norman grew up on their family farm... View Obituary & Service Information

The family of Norman "Norm" Tostenson created this Life Tributes page to make it easy to share your memories.