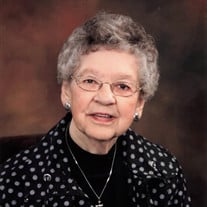 Nellie Grace (Mandler) Jenson, 95, of Fergus Falls, passed away on Saturday, August 28, 2021, at LB Broen Home in Fergus Falls. Nellie moved to the Broen Home on August 25, 2020. Nellie was born April 21, 1926, in Streeter, ND, the daughter of Charles and Effie (Peterson) Mandler. The family later moved to the Amor area. On November 30, 1944, Nellie married James Wellington Jenson in Elbow Lake. They farmed in several locations and then moved to Fergus Falls in 1952 when James started working at the Regional Treatment Center. She had a daycare business for 11 years. Nellie was a member of Calvary Free Lutheran Church in Fergus Falls and was active in the W.M.F Lydia Circle at church. She loved her Lord and attended various bible studies and they also hosted bible studies in their home. Nellie was a Cub Scout leader, a daycare provider, and later worked at the Fergus Falls Middle School as a supervisor in the lunch room. The daycare kiddos referred to her as Mrs. Jenson and James was Pal. Nellie was an excellent cook and baker. They had a large garden and Nellie was the canning and freezing queen. They were always some of the first to bring food to friends when there was a need. Nellie made delicious meals for large groups of friends or family and loved doing it. They also had beds all over their home for relatives and it was so much fun. They had blueprints for their dream home to build on their vacant lot, but mom told dad no. He was already working two jobs and what would people think!! Camping and fishing were favorite past times for Nellie and James with their family. Nellie loved flowers and it showed in their yard in the summer months. She had violets in her windowsills. They enjoyed playing cards and games, Skip-Bo, Rummikub, and Whist were some of their favorites. Preceding her in death were her parents; her husband, James in 2005; one son, David Jenson in 1995, and her siblings and their spouses, Arthur (Erma), Hurley (Rose), Lester (Betty), Bernice (Gordon) Herness, and Florence (Arthur) Berg. Nellie is survived by her children, Donald (Patsy) Jenson of Newfoundland, Canada and Joyce (Gary) Shelton of Fergus Falls; nine grandchildren, Denise Jenson, Rebecca (Aaron) Dillon, Dennis (Koungsook) Jenson, Shannon Brist, Jason (Tara) Brist, Trish (Brian) Thibodeau, Tiffany Shelton, Elisha (Giuseppe Ferrante) Jenson, and Chelsey (Bjorn) Bagent; 23 great-grandchildren; 11 great great-grandchildren; brother, Roy (Nancy) Mandler of St. Paul, and numerous nieces and nephews. Also surviving are a host of wonderful friends. Visitation: 5 to 7 p.m. Wednesday, September 8, 2021 with a public prayer service at 6:30 p.m. at the Olson Funeral Home. Visitation will resume one hour prior to the service at the church. Service: 10:30 a.m. Thursday, September 9, 2021 at Calvary Free Lutheran Church, Fergus Falls, MN. Please refer to Nellie's Tribute Wall for a link to the Live-stream from Calvary Free Lutheran Church. Clergy: Pastors Eric Rasmussen and Jim Johnson Interment: Trinity Cemetery, Henning, MN Arrangements are provided by the Olson Funeral Home in Fergus Falls. Online condolences may be sent to www.olsonfuneralhome.com

The family of Nellie Jenson created this Life Tributes page to make it easy to share your memories.