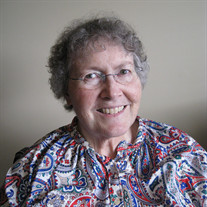 Nancy A. Carter, 77, a resident of Fergus Falls, died Thursday, March 8, 2018, at Lake Region Healthcare in Fergus Falls. She was born on March 24, 1940, was adopted and lovingly raised by Bill and Maude Carter in Ponsford, MN, then later, in Fergus Falls. Nancy graduated from Maplewood Academy, Hutchinson, MN, in 1957. Nancy received her B.A. in English at Walla Walla College and MS in English at Bemidji State University. Nancy taught English at Grand Ledge, MI, Sheyenne River, ND, Pioneer Valley, MA, and College View, NE, all Seventh-day Adventist Academies. She also taught in the public-school system as a sub and an ABE instructor, including ESL and GED. Nancy returned to Fergus Falls in order to be the caregiver for her aging mother, who lived to be 100 years old. Of her many activities, including the Camera Club, Antiquarians, a book club, playing violin in the Otter Tail Valley Community Orchestra, and travelling extensively in Europe, most area people may remember her best for her involvement with genealogy. Nancy was an expert at genealogical research and is listed with the Library of Congress for her referencing system of researching ancestries. She served as archivist in the late 1970s for the OTCHS. She literally was the first member of the Otter Tail County Genealogical Society, at times serving as president and as the Newsletter editor from the beginning, even submitting articles up to the time of her death. Other writings include her diligent work with Walter (Speedy) Spidahl on his skiing biography, and “The Ponsford Connection”, a work on the historical connections around her grandparent’s family farm where she lived as a young child. Through the internet, she was able to connect with her biological brother, Dick, in 2000, and has enjoyed getting acquainted with him and his family ever since. Nancy truly appreciated dogs and always had at least one, often a Chihuahua--Pippa being her high school pet, and more recently, Pippen, a Maltese Shih Tzu. She was preceded in death by her adoptive parents, Bill and Maude Carter, and her beloved pets. Surviving Nancy are her brother Dick (Mary) Ulland, their children and grandchildren, and a half-brother, Jeffery Jetter of California; a close friend, Joyce Arnold of Montana, referred to fondly as “my sister”; her Detroit Lakes church family, and many friends locally. Visitation: 5-7 p.m. Friday, March 16, 2018, with a 6:30 p.m. Time of Sharing, at the Light and Life Auditorium in the LB Broen Home, Fergus Falls, MN, and resumes one hour prior to the service at the church Service: 11 a.m. Thursday, March 22, 2018, at the Detroit Lakes Seventh-day Adventist in Detroit Lakes, MN. Clergy: Pastor Fred Crowell Interment: Linnel Cemetery, Ponsford, MN Arrangements are provided by the Olson Funeral Home in Fergus Falls. Online condolences may be sent to www.OlsonFuneralHome.com

Nancy A. Carter, 77, a resident of Fergus Falls, died Thursday, March 8, 2018, at Lake Region Healthcare in Fergus Falls. She was born on March 24, 1940, was adopted and lovingly raised by Bill and Maude Carter in Ponsford, MN, then later,... View Obituary & Service Information

The family of Nancy A. Carter created this Life Tributes page to make it easy to share your memories.