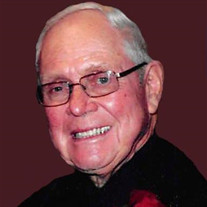 Myron Danielson, age 87, of rural Rothsay, died Friday, September 28, 2018, at the MN Veterans Home in Fergus Falls, MN. He was born May 12, 1931, in Fergus Falls, the son of William “Bill” and Esther (Anderson) Danielson. He grew up in Rothsay on the family farm and graduated from Rothsay Public School in 1949. Myron was drafted into the Army on October 20, 1954, and was honorably discharged on October 11, 1956, after serving in England. Myron returned to the family farm and resumed farming with his father. On October 22, 1960, he married Janice Ohe at Bagstevold Lutheran Church in rural Erhard and started farming on his own. The couple resided in rural Rothsay and raised three children, Mark, Renee and June. Myron was a grain farmer and raised livestock and dairy cattle. He resided on the family farm until 2016, at which time he moved to the MN Veterans Home in Fergus Falls. Myron was a member of Rothsay Baptist Church, the American Legion and Western Minnesota Steam Threshers Association, in Rollag, MN. He was also chairman of the Oscar Township Board and member of the Carlisle and Rothsay elevator boards. Myron enjoyed spending time with his family and friends. He was kind, patient and had a gentle demeanor. He always took time to play with his children and grandchildren. Myron enjoyed spending time and working at the Steam Threshers Reunion in Rollag, especially on his Reeves steam engine. He also enjoyed fishing trips to Canada and time at the family cabin at Pickerel Lake, which he built with his dad before his time in the service. He was preceded in death by his parents, Bill and Esther Danielson and his step-mother, Ella Danielson. He is survived by his wife, Janice Danielson of Rothsay; three children, Mark Danielson of Rothsay, Renee (Darin) Balken of Montevideo, June (Jason) French of Montevideo; two grandchildren, Kara Balken, Erin Balken; one sister, Betty (Jerry) Johnson of Fergus Falls and nieces, nephews and other relatives. The family would like to extend their appreciation for the care Myron received while he was a resident of the MN Veterans Home. Visitation: 5-7 p.m. Tuesday, October 2, 2018, with a 6:30 p.m. prayer service at Rothsay Baptist Church, and will resume one hour prior to the service at the church Service: 11 a.m. Wednesday, October 3, 2018, at Rothsay Baptist Church, Rothsay Clergy: Reverends Wendell Wahlin and Leon Andersen Interment: Rothsay Baptist Cemetery, rural Rothsay Olson Funeral Home in Fergus Falls is in charge of the arrangements. Online condolences may be sent to www.olsonfuneralhome.com

The family of Myron William Danielson created this Life Tributes page to make it easy to share your memories.