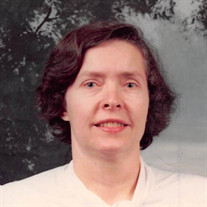 Myrna Mae (Peoples) French, 85, passed away Thursday, July 11, 2019 at PioneerCare in Fergus Falls. She was born January 11, 1934 in West Woodstock, VT to Orvis and Jessie (Rhodes) Peoples. She graduated from Woodstock High School and went on to teacher’s college. Later earning a B.S. degree in Paralegal Studies from Wesley College in Dover, DE in 1991, graduating Summa Cum Laude. She then married John (Jack) French on April 18, 1953 in North Hartland, VT. Together they raised five children. Besides being a wife and mother, she was a Girl Scout and Campfire leader, a singer with the Barbershop Belles in Fergus Falls, and a second mother to many of her children’s friends. She loved to hike and do Volksmarches, read, sew, canoe, garden, write, and play games and puzzles. She went with Jack to Bangladesh when he worked with USAID for three years. From there they traveled to India, Nepal, Indonesia, Thailand, and South Korea; having many adventures like seeing the Taj Mahal, riding on elephants, seeing the Himalayas, and shopping the bazaars. She was a prayer warrior, praying for a long list of people daily. She was strong willed, big-hearted, and had a sense of humor that matched both. Myrna was preceded in death by her parents; three brothers, Orvis Jr., Wilmer, and Vernon Peoples; one sister, Verla Jewell; a grandson, Josiah Donaldson and a granddaughter-in-law, Natasha Donaldson. She is survived by her husband, Jack of Fergus Falls; two sons, Arthur of Lebanon, NH and Daniel of East Thetford, VT; three daughters, Ellen (Frank) Donaldson of Fergus Falls, Debra (Daryl) Donahue of Randolph, VT, and Karen (Mark) Stanley of Newport News, VA; thirteen grandchildren, and nineteen great-grandchildren. Visitation: One hour prior to service Service: 11:00 a.m. Tuesday, July 16, 2019 at Woodland Baptist Church Fergus Falls Burial: Barnard, VT at a later date Clergy: Reverend William Lobb Arrangements provided by Olson Funeral Home, Fergus Falls. Online condolences may be sent to www.OlsonFuneralHome.com

Myrna Mae (Peoples) French, 85, passed away Thursday, July 11, 2019 at PioneerCare in Fergus Falls. She was born January 11, 1934 in West Woodstock, VT to Orvis and Jessie (Rhodes) Peoples. She graduated from Woodstock High School and went on... View Obituary & Service Information

The family of Myrna French created this Life Tributes page to make it easy to share your memories.