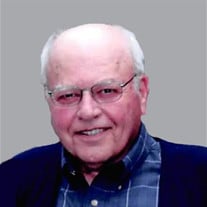 Milo Andersen, 86, of Fergus Falls, died Thursday, December 26, 2019, at PioneerCare in Fergus Falls. Milo was born on January 4, 1933, in Sidney, MT to Volney and Aldyth Andersen. He grew up on a sugar beet farm SW of Sidney. He attended Sidney schools and graduated from high school in 1951. Following high school, Milo enlisted in the US Navy in 1951 and served on the USS Buck, a destroyer, in the Pacific during the Korean War. He was honorably discharged in 1955 and continued his service with the Montana National Guard. He worked for General Mills as a salesman in Great Falls, MT where he met his future wife, Ione, while visiting a cousin. Milo and Ione married in Minot on December 29, 1956. Milo became a member of the Williston Police Department as a detective in 1959. During this time Milo found his life calling and became a welder with Palmer Welding Service. He also attended night classes at the college and received his degree from the University of South Dakota. In 1973, he established the welding program at Williston High School and continued there for seven years. The 1980’s oil boom was calling and he began operation of Andersen Welding Service, working western ND and eastern MT. In 1983, he returned to teaching and developed the welding program at Dickinson High School. He remained there until retirement in 1997. During this time, he also taught welding classes at the South West Multi County Correction Center for juveniles. In 1990, he and Ione bought a lot on Heilberger Lake and spent summers there until 2003. At that time a home was purchased in Fergus Falls overlooking Opperman Lake. Milo loved to tell stories, captivating a room with his great sense of humor. His friends and family were drawn to him knowing they’d always have a good laugh. He enjoyed taking pictures of his family and travels. He took pride in his home and having a beautiful yard. Milo took up cooking and became an expert at baking. His lefse and rosettes were always top notch – the best of the best. He liked to hunt pheasants and deer in his younger years. Lake Sakakawea was his favorite fishing hole. Milo was a charter member of Gloria Dei Lutheran Church in Williston. He was a distinguished member and served as president of the Williston Lions Club. He was a member of Bethlehem Lutheran church and Men of Bethlehem in Fergus Falls. He belonged to the Y’s Folks of the YMCA and served as president in 2007. He also held membership in the VFW and DAV. He was a loving husband, father and grandfather. He will be dearly missed. He was preceded in death by his father, Volney Andersen; mother, Aldyth (Baardson) Andersen, and brother, Eugene Andersen. Milo is survived by his wife, Ione Andersen; children, Scott (Louise) Andersen of Belle Rose, LA, Karyn (CJ) Menagh of Holmen, WI, Jill Andersen of Richfield, MN, Sonya (Jim) Ruelle of Park City, UT, and Maren (Jim) Boerger of Prairie du Sac, WI; grandchildren, Kirsten (Ivan) Bucher, Hunter (Harley) Ruelle, Elizabeth Ruelle, Owen Ruelle, Trigve Andersen Duryea, Annika Andersen Duryea, Jack Boerger, Micah Boerger, Trae (Jennifer) Dupre, and Eric Dupre; great-grandchildren, Hallie Dupre, Harper Dupre, Mattie Dupre, Simon Bucher, and Eliza Bucher; other family, Donna (Ross) Kafer, a niece, and numerous cousins. Visitation: One-hour prior to the service at the funeral home. Service: 11:00 a.m., Thursday January 2, 2020, at the Olson Funeral Home in Fergus Falls. Clergy: Reverend Tom Peterson Interment: North Dakota Veterans Cemetery, Mandan, ND Arrangements are provided by the Olson Funeral Home in Fergus Falls. Online condolences may be sent to www.olsonfuneralhome.com

Milo Andersen, 86, of Fergus Falls, died Thursday, December 26, 2019, at PioneerCare in Fergus Falls. Milo was born on January 4, 1933, in Sidney, MT to Volney and Aldyth Andersen. He grew up on a sugar beet farm SW of Sidney. He attended... View Obituary & Service Information

The family of Milo Andersen created this Life Tributes page to make it easy to share your memories.