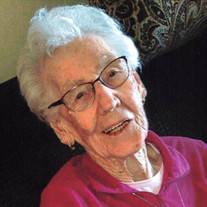 Mildred A. Wilde passed away to her heavenly home on Wednesday, November 18, 2020, just 16 days before her 104th birthday on December 4, under the care of the Good Samaritan Home in Battle Lake, due to COVID-19. She was the last living child of John and Hulda Roehl of Carlisle Township. Millie was baptized and confirmed at Trinity Lutheran Church in Fergus Falls. She was a member at Bethlehem Lutheran Church. She attended District #54, a one room school house on highway 59 through eighth grade, when she was needed at home. She worked very hard cooking, baking, sewing, working outdoors, and other tasks. Millie met and married Eugene Wilde in the spring of 1935. Together they had three children, E. David, Michael, and Judy. Eugene “Prunes” passed in 1986. Millie worked for the Elizabeth Creamery candling eggs. After Prunes retired, she and Prunes were the managers of the Elizabeth Municipal Liquor Store until the late 70’s. The family attended St. Johns Lutheran Church of Elizabeth. She served as secretary of LWML for many years. She embroidered a gold cross on a linen handkerchief for each person baptized in the church. She volunteered for the Elizabeth Community Center and the Otter Tail Community Food Share. She served on the Election Committee for Village of Elizabeth and was the Grand Marshall for Hay Days. Millie was always ready to help a neighbor and a family member. At the age of 98, Millie moved to the Good Samaritan in Battle Lake and was involved in many activities there, such as tying quilts, making cards, and enjoying the fun activities that the home provided. She was proud of being crowned “Valentine’s Day Queen” and was able to ride in the Chief Wenonga Days parade. Preceding her in death were her husband, Eugene “Prunes” Wilde; son, E. David Wilde; grandson, Robby Leitch; brothers, John Jr., George, and Harry Roehl; sisters, Esther Gunderson, Irma Enderson, Leona Diederich, Helen Geske, and Gladys Splittstoesser. Millie is survived by her children, Michael (Mary) and Judy (Larry) Leitch; daughter-in-law, Sharon Wilde; eleven grandchildren; eight great-grandchildren, and one great-great-grandchild. There will be a private family graveside service held. Please refer back to the funeral home website and Millie’s Tribute Wall for a recording of the service. Arrangements are provided by the Olson Funeral Home in Fergus Falls. Online condolences may be sent to www.olsonfuneralhome.com

Mildred A. Wilde passed away to her heavenly home on Wednesday, November 18, 2020, just 16 days before her 104th birthday on December 4, under the care of the Good Samaritan Home in Battle Lake, due to COVID-19. She was the last living child... View Obituary & Service Information

The family of Mildred Wilde created this Life Tributes page to make it easy to share your memories.

Mildred A. Wilde passed away to her heavenly home on Wednesday,...