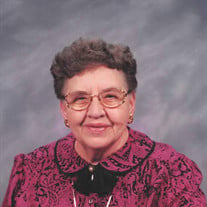 Mildred Stras, 94, of Fergus Falls, died Tuesday, October 15, 2019 at Pioneer Senior Cottages. Mildred Georgia “Millie” was born in Aastad Township on February 22, 1925, the daughter of Carl and Julia (Olson) Knudson. She was one of eleven children. Her family lived on several different farms while she was growing up. On March 27, 1946, she married Orville Stras and they made their home on a small farm north of Underwood. In addition to always working outside the home, Millie canned, baked, sewed her children’s clothes, had beautiful flowers and substantial vegetable gardens. Millie was very active in her community. She was an active member of the Tingvold Lutheran Church, a very involved 4-H leader, and a member of the American Legion and VFW Auxiliaries in Underwood. She is survived by her children, James of Battle Lake, Penny of Baxter, and Michael (LuRae Melaas) of McGregor; daughter-in-law, Sharon of Fergus Falls; sister, Helen Christenson of Henning; as well as four grandchildren, five great-grandchildren, eight great-great-grandchildren, and many loving nieces and nephews. She was preceded in death by her parents; her husband, Orville; nine brothers and sisters, and a son, Richard. Visitation: Monday, October 21, 2019, one-hour prior to the service at the funeral home Service: Monday, October 21, 2019, at 11:00 a.m. at the Olson Funeral Home of Fergus Falls. Tribute Celebrant: Margaret Schroeder Interment: Tingvold Cemetery, Underwood Arrangements are provided by the Olson Funeral Home of Fergus Falls. Online condolences may be sent to www.olsonfuneralhome.com

The family of Mildred G Stras created this Life Tributes page to make it easy to share your memories.