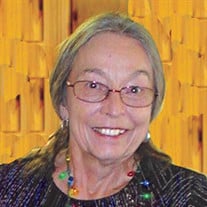 Michele Ann (Johnson) Heiberg of Herman, Minnesota, died March 21, 2020, at Courage Cottage Hospice in Morris, Minnesota. She was 79. Michele was born September 3, 1940, in Duluth, Minnesota to George D. and Eleanor (Hall) Johnson. She grew up in the Morgan Park neighborhood of Duluth, roaming the natural areas between her parents’ and grandparents’ houses. She graduated from Morgan Park High School in 1958, where she was interested in art and costume and set design. She attended Hamline University in St. Paul where she showed an interest in Mayan history and Aztec language, later continuing her education at the University of Minnesota. She was acutely aware of politics her entire life, both as an individual and as a campaign manager for Jim Nelson’s of Elbow Lake campaign for state Representative. She and Owen Heiberg met while each was working at Madden’s Resort in Brainerd, Minnesota, and married December 27, 1960. They moved to Lake Forest, Illinois in fall of 1961, where Owen taught English at Lake Forest Academy. Michele continued her roams in the woods around the campus, this time accompanied by one or two daughters. Michele, Owen, and their three daughters moved to Hopkins, Minnesota, in 1970, where he taught at Blake School for two years before the family moved to Herman, Minnesota to operate The Herman Review and The Chokio Review in Chokio, Minnesota. Michele partnered in producing and editing the newspapers, wrote periodically for The Herman Review and did both news photography and art photography. She maintained her interest in growing things by cultivating a garden and taking daughters on trips to Pine Ridge Park. She was a member of the committee that helped develop land donated to the City of Herman into Niemackl Lake Park. She was also a member of the committee that helped develop The Herman Iron Pour held at the park which, for more than ten years drew sculptors from all over the United States to pour iron with community residents. She designed sets and costumes for theatrical productions of Prairie Wind Players community theater based in Barrett, Minnesota, and community theatrical productions in Herman, and contributed those skills to other community projects. She continued to garden and roam through woods, prairie, and educational environments. Michele is survived by her sister, Barbara and Rick Auerbach and nephew Dan Auerbach of Philadelphia, Pennsylvania; daughters Annette Heiberg and Harvey Uken of Crookston, Minnesota, Nikki Eystad and Ed Hockert of Morris, Minnesota, and Nina Heiberg of Phoenix, Arizona; two grandsons, Joel and Courtney Eystad and their daughter Raegan, Michele’s great granddaughter, of South Haven, Minnesota, and Jake Eystad of Redmond, Washington; and cousins including Lynn and Mike Olund of Duluth, Minnesota and many Heiberg family relatives. She was preceded in death by her mother, Eleanor; her father, George; husband, Owen; and son-in-law, Joe Eystad. A memorial service will be held in Herman at a later date. Olson Funeral Home in Fergus Falls is in charge of arrangements. Online condolences may be sent to www.olsonfuneralhome.com

The family of Michele Heiberg created this Life Tributes page to make it easy to share your memories.