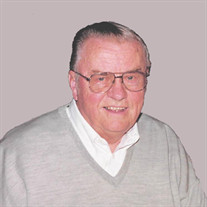 Michael Allen Wollan, 87, a resident of Fergus Falls, died peacefully in his sleep on Monday, April 30, 2018. He remained active and enthusiastic about life until the very end of it. He was born on December 15, 1930, to Erling Magnus and Blanche (Sedin) Wollan, in Rochester, MN. Mike, his older sister Merle, and his parents lived in Glenwood together until Blanche’s death in 1934. Erling remarried Rubye Berry, and a new family was created that included Rubye’s son, Jack, who became Mike and Merles’ big brother. All enjoyed life on the shores of beautiful Lake Minnewaska, an idyllic place to grow up. Mike had many cherished memories of swimming across the lake, fishing, boating, and growing up in a golden age in a bucolic setting. Glenwood remained an important part of his life. When Mike was in high school, he hitch-hiked to Yellowstone to work for the summer, one of his favorite adventure-filled stories. He returned to graduate from high school in 1949, and then attended Luther College in Decorah, IA. Mike was drafted into the military in 1951. He served in the United States Air Force at F.E. Warren AFB in Cheyenne, WY. Mike graduated from St. Cloud State University and received his Master’s Degree in Education from University of North Dakota in 1967. He had a long career teaching at Concordia College, Fergus Falls High School and Fergus Falls Community College. He loved being a teacher, and throughout his life, heard from his past students and loved nothing more than running into them to share memories. On June 7, 1957, Mike married Valdine Weiss at St. John’s Lutheran Church in Erhard. They were married for 57 years before Val passed away in 2015. With their three children, Gregory Michael Wollan, Vicki Wollan Smith and Debra Wollan Opatz, the family made their home in Fergus Falls where Mike and Val lived for the rest of their lives. Mike and Val had an active life in Fergus with their careers, family, and friends. They were members of First Lutheran Church for over 50 years, where Mike was a tenor in the church choir. Mike and Val were members of a dinner club with other local couples for many years and had a close-knit group of friends affectionately known as “the old gang,” a name whose meaning changed the longer they knew each other. Mike was a dedicated Rotarian and President in 1981. After retirement, Mike stayed busy, volunteering, spending time at the beloved family lake cabin and traveling. Travel was Mike’s passion. He was born with an adventurous spirit that was not allayed with age. He and Val took several trips to Europe, often visited California to see Vicki and her kids, and had many local favorite destinations as well, including yearly sojourns to Itasca State Park, White Bear Lake, and road-tripping to Yellowstone with the Opatz clan. Mike traveled to Santa Barbara last year to visit old friends and was planning a trip to San Francisco in the coming weeks. He would go anywhere, anytime. Mike’s children and grandchildren remember him as a loving, kind, warm and smiling presence. He was a social butterfly, loved people, enthusiastically loved life, and refused to slow down. The Jewett Lake cabin was the center of family life, with Mike driving the pontoon, grilling dinner and enjoying a Bud Light on the deck in the evening. Mike loved music, favorites being jazz, big band and any band Greg was in. He was a ski-jumper in his youth, loved cars and the Timberwolves, but most of all, he loved his family. Preceding him in death were his wife, Val; parents, Erling (Mike) Wollan, Blanche Wollan, Rubye Wollan; brother, Jack Berry; and sister, Merle Cox; along with aunts, uncles and friends. Survivors include children, Greg (Kim) Wollan of White Bear Lake, Vicki Wollan Smith (soon to be McKown), her fiancé Craig McKown of San Francisco, and Debra Wollan (Jon) Opatz of Fergus Falls; and grandchildren, Sam, Luke, Jacob and Grace Opatz, and Maren and Elinor Smith. Visitation: 5-7 p.m. Thursday, May 3, 2018, with a 6:30 public prayer service, at First Lutheran Church in Fergus Falls, and resumes one hour prior to the service Service: 1 p.m. Friday, May 4, 2018, at First Lutheran Church in Fergus Falls Clergy: Reverend Marcus Kunz Military Participation: Fergus Falls American Legion Post 30 and VFW Post 612 Interment: First Lutheran North Cemetery, Fergus Falls, MN Arrangements are provided by the Olson Funeral Home in Fergus Falls Online condolences may be sent to www.OlsonFuneralHome.com

Michael Allen Wollan, 87, a resident of Fergus Falls, died peacefully in his sleep on Monday, April 30, 2018. He remained active and enthusiastic about life until the very end of it. He was born on December 15, 1930, to Erling Magnus and... View Obituary & Service Information

The family of Michael A. Wollan created this Life Tributes page to make it easy to share your memories.