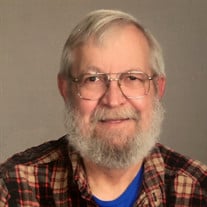 Michael Martin O’Donnell, 66, of Underwood, died Monday, December 23, 2019, unexpectedly at his home. Michael was born to Thomas and Jean (Kurtz) O’Donnell on October, 18, 1953, in Amery, WI. In 1972 he graduated from New Richmond, WI, High School. Following graduation, he joined the military, Navy Seabees from 1972 – 1975, serving in Puerto Rico, Diego Garcia and Guam. He received the National Defense Service Medal. While in the Military he met his wife, Melissa Jo Leitch. They were married July 15, 1975, in Balsam Lake, WI. After their marriage and military discharge, the couple moved to the Underwood area. He was employed with Howard Knight Construction and later became an independent contractor in the concrete business. He was also employed at the Conoco Station in Underwood, farmed and for the past 15 years at StoneL Corporation in Fergus Falls. Michael was a member of the Underwood American Legion Post 489 and Sverdrup Lutheran Church. He enjoyed bowling, hunting, fishing, the outdoors, vegetable gardening and most of all spending time with his grandchildren. He was preceded in death by his parents, Thomas and Jean O’Donnell; father and mother in-law, Andy and Carol Leitch. Michael is survived by his wife, Melissa of Underwood; son, Tom of Castle Rock, CO. and his daughter, Addison; son, Dan (Jennifer) of Barnesville and their children, David and Grace. two sisters, Suzanne O’Donnell and Theresa (Donald) Dreher; three aunts and one uncle; numerous nieces, nephews and cousins. A service will be held at a later date. Arrangements with the Olson Funeral Home in Fergus Falls. Online condolences may be sent to www.olsonfuneralhome.com

The family of Michael Martin O'Donnell created this Life Tributes page to make it easy to share your memories.