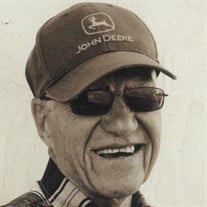 Melvin Albert Duenow, 96, of rural Fergus Falls died, February 8, 2019 at PioneerCare in Fergus Falls, under the care of LB Hospice and surrounded by his family. Melvin was born on July 10, 1922 on the family farm in rural Fergus Falls, the son of Herman and Francis (Richter) Duenow. He was baptized on August 1, 1922 at home and confirmed at Trinity Lutheran Church in Fergus Falls. In Melvin’s younger years he worked on the family farm and helped out the surrounding neighbors with spring planting and at harvest time. He was a Golden Gloves boxer and won many championships and sportsmanship trophies. Melvin joined the United States Army in December 1944 and was honorably discharged in July 1946. On April 29, 1950, he married Deloris Kowalski in Elizabeth. After a few years of marriage, they purchased a farm in Elizabeth township, where they started and operated a dairy farm. Melvin started working for Raymond Motors, which was later sold to Hyman Freightway. During the summers Melvin would take Deloris and his girls on vacation to visit his son Mitch and family in states such as California, Washington, Nebraska, Alaska and several other short trips to neighboring states and Canada. Melvin was a very active member of Immanuel Lutheran Church, where he served on the church council and helped with taking care of the church grounds, mowing the church cemetery and doing maintenance work around the church. As Melvin’s health failed; he continued to do the duties of a church trustee, a position that was very important to him. He was also a member of the Fergus Falls American Legion. Melvin always had a smile on his face, a joke to tell and loved to joke around with everyone. He had a wonderful sense of humor until the end. Everyone enjoyed being around him and it was a real party when he was around. He enjoyed woodworking, taking his grandchildren fishing and his fishing trips he took to Alaska. Melvin also loved animals and the outdoors, working on his yard and taking care of his flower gardens. Preceding him in death were his parents; daughter, Karen Pourrier, grandson, Jake Arntson and brothers, Roger and Floyd Duenow. Survivors include his wife, Deloris of Fergus Falls; children, Mitch (Joyce) Duenow of Fargo, ND, Vicky (Randy) Arntson of Pelican Rapids, Kristi (Mike)Beeler of St. Stephen; grandchildren, great-grandchildren, great-great grandchildren; brother, Raymond (Eydth) Duenow of Fergus Falls; sister, Delilah Norman of Fergus Falls and several nieces, nephews and cousins. We would also like to thank the PioneerCare Center staff, LB Hospice, Lake Region Healthcare, Ringdahl Ambulance and the Elizabeth Fire Department First Responders for taking such good care of Melvin. To the first responders from the bottom of our hearts, we appreciate your speediness and kindness of getting to Melvin so quickly. Thank You All! Visitation: 5:00-7:00 PM Thursday, February 14, 2019 with a prayer service at 6:30 PM at the Olson Funeral Home and resumes one hour prior to the service at the church Service: 11:00 AM Friday, February 15, 2019 at Immanuel Lutheran Church, rural Fergus Falls Clergy: Reverend Craig Palach Interment: Immanuel Lutheran Cemetery, rural Fergus Falls. Military Participation: Fergus Falls VFW Post 612 and American Legion Post 30 Arrangements with Olson Funeral Home in Fergus Falls. Online condolences may be sent to www.OlsonFuneralHome.com

The family of Melvin Duenow created this Life Tributes page to make it easy to share your memories.