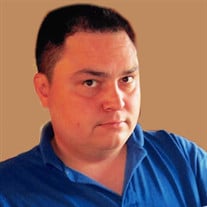 Matthew “Matt” Avery, 45, of Fargo, formerly of Pelican Rapids, died Tuesday, August 27, 2019 unexpectedly. Matt was born June 1, 1974 in Detroit Lakes, to John and Betty Lou Avery. He attended school in Detroit Lakes and Pelican Rapids. He then went on to Leech Lake Tribal College where he graduated with a degree in Law Enforcement and was POST certified and also attended the University of Minnesota, Crookston where he studied Ag Aviation. Matt received his pilots license in April of 1996. He was a truck driver, a chef, a bartender and also had an internship at the Jet Propulsion Lab for NASA in California. He was a member of the NRA and also the Aircraft Owners and Pilots Association. He grew up hunting and fishing and riding his horse as a child. He spent time wrestling while in school. He enjoyed motorcycling, and making modifications on his Harley and his car. He wouldn’t finish until the job was done. As a chef for many years, he enjoyed trying new restaurants and new food. He was a friendly bartender and always made guests experiences enjoyable when he was working. He got his CDL and did over the road trucking where he met many new friends. He loved to travel and make friends globally. Matt liked to read, listen to public and XM radio, and watch movies. He enjoyed spontaneous moments and was very much a practical joker. He enjoyed laughing and hanging out with family and kept up with all of our activities, even though work often prevented him from being there. He enjoyed time with friends also. He was preceded in death by his grandparents, aunts, and uncles. Matt is survived by his parents, John (Peggy) Avery of Fergus Falls and Betty Lou Nordstrom of Detroit Lakes; sister, Shannon Avery; brother, Gabriel (Tahnee Lohnes) Avery; nephews, Tyler and Gavin Avery, and numerous cousins, aunts, and uncles. Visitation: 9:30-10:30 a.m. Wednesday, September 11, 2019 at Trinity Lutheran Church in Detroit Lakes, MN. Service: 10:30 a.m. Wednesday, September 11, 2019 at Trinity Lutheran Church in Detroit Lakes, MN. Clergy: Reverend Jillene Gallatin Interment: Immanuel Lutheran Cemetery, Osage, MN Funeral Home: Olson Funeral Home, Fergus Falls Online condolences may be sent to www.OlsonFuneralHome.com

The family of Matthew "Matt" Avery created this Life Tributes page to make it easy to share your memories.