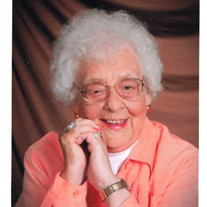 Mary Pauline (Madsen Weossner) Haukos, 91, of Fergus Falls, died peacefully Tuesday April 28, 2020, at PioneerCare in Fergus Falls. Pauline was born August 12, 1928, to John and Louise (Bredehoft) Madsen in Stanton, NE. She was the third of eight children and the last surviving. The Madsen family moved to Minnesota when Pauline was a young child, she was raised in the Maplewood area and eventually moved to Fergus Falls where she attended school and graduated. She met Rudolph Weossner while waitressing in Elbow Lake. They were married and farmed north of Elbow Lake. They had two children, Judy and Connie. Pauline was an avid sports fan, loved to bowl, read, and knit. She was an excellent cook and her meals were popular with the locals for several years at the Elbow Lake Bowling Alley Restaurant, the hotel café, and in the 60’s at the Cat’s Eye Steakhouse. In 1976, Pauline met a wonderful man, William (Bill) Haukos in Fergus Falls and they were married in 1977. They loved traveling and took several cruises and trips abroad. They especially enjoyed their camper trailer at Ten Mile Lake during the summer months. In the winter they became “snowbirds” and made their nest in McAllen, TX. Bill was an Air Force man and Pauline also became active in the VFW Auxiliary. They attended several national conventions with their many friends. In 1999, Bill passed away and Pauline continued living in their apartment in Fergus Falls until she recently moved to PioneerCare when it became increasingly difficult for her to live alone. Pauline is survived by her daughters, Judy Fuchs of Moorhead and Connie Koosman of St. Cloud; special granddaughter, Amy (Victor) Backman of Minneapolis; step-daughter, Diane (Steve) Stenerson of Rothsay; step-son, Jeff Haukos of Fergus Falls, and numerous nieces and nephews. Preceding her in death were her husband, Bill Haukos; parents, Louise and John Madsen; step-father, Al Copeland; all of her sisters and brothers, Luella Sanders, John Madsen Jr, Robert Madsen, Shirley Johnson, Donald Madsen, and David Madsen, and sons-in-law, Jerome Fuchs and Curt Koosman. Due to the current coronavirus pandemic, a memorial service will be held at a later date. Arrangements are provided by the Olson Funeral Home in Fergus Falls. Online condolences may be sent to www.olsonfuneralhome.com

The family of Mary Pauline Haukos created this Life Tributes page to make it easy to share your memories.